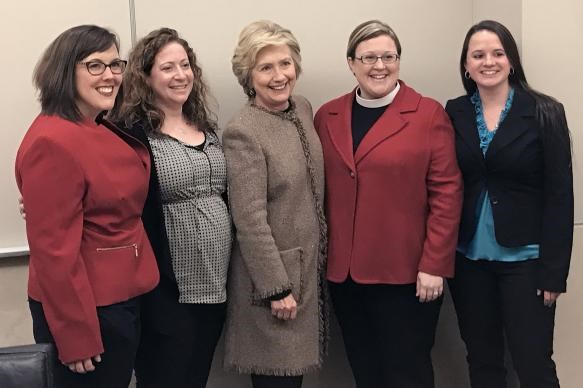 Joining Hillary Clinton, center, at a Jan. 31 lunch were, from left, the Revs. Jen Tyler, Emily Peck-McClain, Danyelle Ditmer and Shannon Sullivan. The four United Methodist clergywomen, along with the Rev. J. Paige Boyer, were part of an editorial team sending daily devotions during Clinton’s campaign for U.S. president.

When a small group of young clergywomen joined an effort to provide a daily devotion to Hillary Clinton during the recent U.S. presidential campaign, they were looking to support a fellow United Methodist.

But they also created the #wepraywithher project as a way to acknowledge the work of Clinton and other women who have broken both glass ceilings and stained-glass ceilings.

Eventually, 116 women under 40 — elders, deacons, licensed local pastors — participated in the campaign, which started Sept. 1 and continued through the end of 2016, the organizers said.

“We wanted to do something that says thank you to the women who came before us because we know we are standing on their shoulders,” explained the Rev. Emily Peck-McClain, 36, an assistant professor at the seminary of Eastern Mennonite University in Harrisonburg, Va., and one of the organizers. Peck-McClain is an elder in the New York Conference.

Peck-McClain and three others on the “wepraywithher” editorial team — the fifth was on a mission trip to Cambodia — attended a Jan. 31 lunch at the Interchurch Center in New York where Clinton greeted some of those who had written devotions for her.

The Rev. Bill Shillady, director of the United Methodist City Society and a pastoral friend of the Clinton family, arranged for the lunch and is in negotiations with Abingdon Press to publish a collection of the devotions for broader use.

He first started sending the daily missives to Clinton on his own, but later turned to colleagues from the New York Conference for assistance, eventually recruiting “the rainbow of Methodism,” along with a few of other faith traditions. “I think it gave her the opportunity to hear different voices,” he said.

The young clergywomen became aware of the project following the Democratic National Convention in Philadelphia, where Shillady gave the closing prayer.

The Rev. J. Paige Boyer, 35, a United Methodist pastor serving two churches in the Cleveland area, said she was struck by the religious tone at the convention and the role that faith had played in Clinton’s life. She shared her impressions in a post to a Facebook group of clergywomen under 40. “This amazing group of women” heard the call and stepped up to respond, she said.

“For me, it was about praying for, being in relationship and supporting someone who was United Methodist, whose faith clearly influenced her politics as she ran for the highest office in the country,” Boyer said.

Peck-McClain, who knew Shillady, reached out to him and learned about the daily devotions project, which seemed like a good avenue for spiritual support. “We all have people we are praying for and with and preaching to every week,” she pointed out. “This was an extension to that call we already have.”

The Rev. Danyelle Ditmer, 34, pastor of Wall Street United Methodist Church in Jeffersonville, Indiana, signed on, creating a website and Google forms for those who wanted to participate.

“One of the things that draws me to her (Clinton) as a leader is how much she talks about her faith and how real that is to her,” she said.

Sullivan is the daughter of a clergywoman, the Rev. Melissa McDade, and is well aware of both the accomplishments of her mother and her colleagues and the challenges they have faced. Her mother handled blatant sexism “with such grace,” Sullivan said. “I feel like Hillary Clinton did that as well.”

Young women still get “pushback” over their personal and career choices, Tyler added. To have a woman, regardless of politics, as a nominee for president, she believes, “was a huge moment” for the country.

“This wasn’t a partisan thing, “Peck-McClain said. “We made it very clear that participating in the project was not about who you were voting for.”

The devotions — edited by the team before being sent to Shillady — focused on women in the Scriptures, women like Queen Esther who stepped forward on behalf of her people after a decree was made for the Jews to be killed.

In fact, Esther 4:14 was the most popular passage used by the #weprayforher devotion writers: “For if you keep silence at such a time as this, relief and deliverance will rise for the Jews from another quarter, but you and your father’s family will perish. Who knows? Perhaps you have come to royal dignity for just such a time as this.”

Each writer offered their own frame of reference on that and other biblical passages, Sullivan said, which they also shared among themselves, providing “another way to build community” among the group of young clergywomen.

“It became a part of my daily devotional to read and pray through those (messages),” Tyler said. “While they were written specifically for Secretary Clinton, they were timely for all of us.” Clinton was secretary of state during the Obama Administration.

Shillady said the devotions, which focused on Advent and Christmas after the election, “helped center her (Clinton), helped her to have a start that was based in faith each day.”

Clinton spoke briefly during the Jan. 31 lunch about the impact the daily devotions had on her. “It was the first thing I would read in the morning,” she told the group.

In addition to the young clergywomen, the lunch participants included pastors from the New York Conference; the Rev. Frederick Davie, executive vice president of Union Seminary; the Rev. Amy Butler, senior minister of Riverside Church, and the Rev. Ginger Gaines-Cirelli, senior pastor of Foundry United Methodist Church, where the Clintons were members during Bill Clinton’s presidency.

“You kept me going,” Clinton said. “You gave me a lot of strength.”

Bloom is the assistant news editor for United Methodist News Service and is based in New York. Follow her at https://twitter.com/umcscribe or contact her at 615-742-5470 or newsdesk@umcom.org. To read more United Methodist news, subscribe to the free Daily or Weekly Digests