WCC General Assembly Closes With Call to ‘Act for Justice’

WCC General Assembly Closes With Call to ‘Act for Justice’

The 11th General Assembly of the World Council of Churches is now history. At the ecumenical summit in Karlsruhe, Germany, around 3,000 participants from 120 countries met Aug. 31-Sept. 8 to discuss the future direction of ecumenism. The meeting ended with a worship service.

The World Council of Churches is a community of 352 churches that together represent over 580 million Christians worldwide. The Roman Catholic Church is not a member but has observer status. This large, ecumenical, worldwide association is headquartered in Geneva and was founded Aug. 23, 1948, in Amsterdam; its General Assembly meets every eight years.

In a message at the end of the meeting, delegates called for the “healing of our living planet.” The message, titled “A Call To Act Together,” read: “We will find a strength to act from a unity founded in Christ’s love.” The goal is to create and maintain peace. 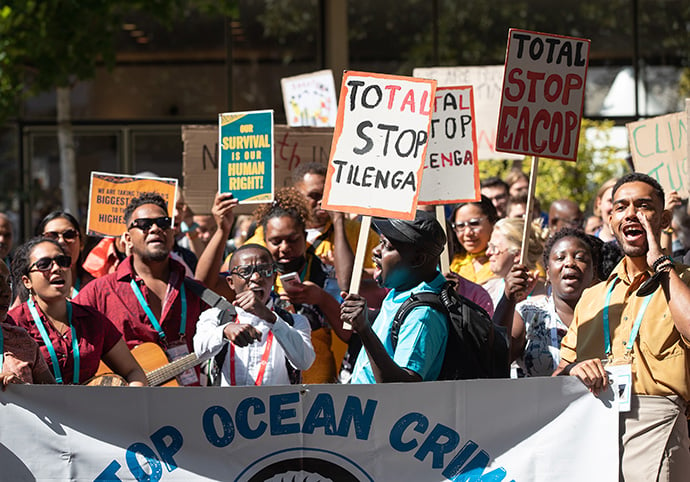 Activists call attention to climate change during a protest at the World Council of Churches' 11th Assembly in Karlsruhe. Photo by Mike DuBose, UM News.

The message, which ties in with the texts of the General Assemblies of 1948 in Amsterdam and 1975 in Nairobi, warns of catastrophes that originate in an irresponsible and broken relationship with creation that has led to ecological injustice and the climate crisis.

Referring to the theme of the General Assembly, “Christ's Love Moves the World to Reconciliation and Unity,” the delegates emphasized that Christ’s love urges us to come to Christ in solidarity and “to respond and act for justice.” 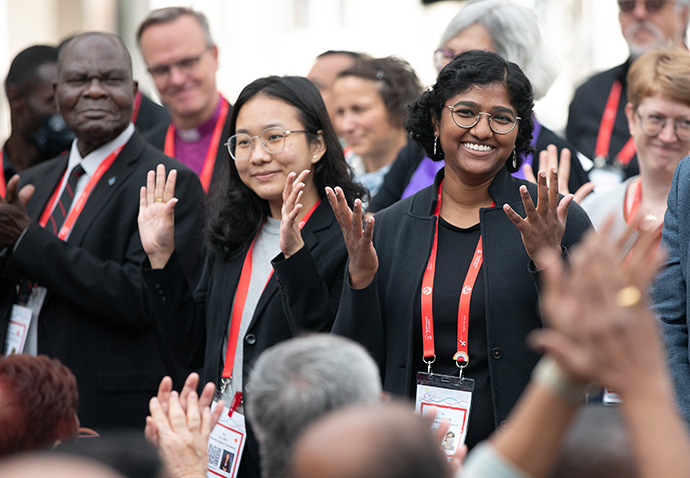 New members of the Central Committee of the World Council of Churches greet the congregation in sign language during the closing prayer service for the WCC Assembly. Among the new leaders is the Rev. Ann Jacob (right, front), a pastor at Edmonds (Wash.) United Methodist Church. Photo by Mike DuBose, UM News. 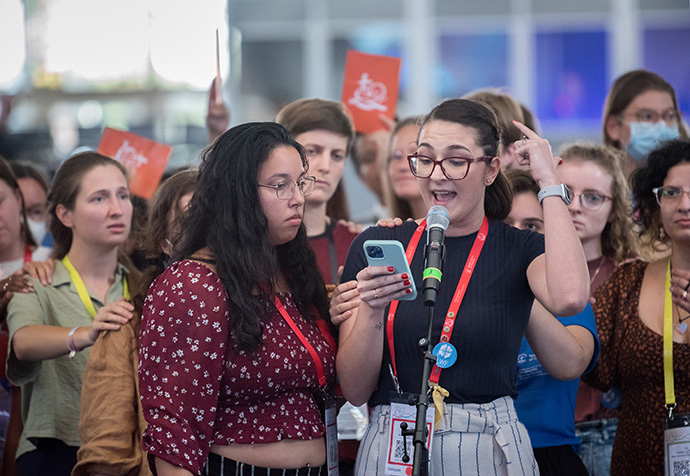 Dozens of young assembly participants gather during a business plenary session of the WCC 11th Assembly to demand better representation and to have their voices be heard more loudly in the worldwide fellowship of churches. At the microphone is Isabella Reimann Gnas of the Evangelical Lutheran Church of Brazil. Photo by Albin Hillert/WCC.

Meeting every two years, the Central Committee is the highest governing body of the WCC in

the time in between General Assemblies. It carries out the policies adopted by the General Assembly, supervises and directs the program work, and decides on the budget.

As the size and composition of the Central Committee for the next eight years were being determined, a group of 38 young General Assembly members put forward a statement of protest. As members of the generation affected by present and coming developments in climate and society, and in view of the worldwide number of young people, they demanded more participation and voices on the committee.

The policy committee of the WCC noted that youth must be fully included in all of its commissions, committees, advisory groups and reference groups. However, some member churches apparently hesitate to nominate young people for the Central Committee and other committees.

Newly elected General Secretary Jerry Pillay gave a speech to the members of the General Assembly at the end of the meeting. Pillay is dean of the Faculty of Theology and Religion at the University of Pretoria in South Africa and a member of the Union Presbyterian Church in southern Africa. He will take over as general secretary from the Rev. Ioan Sauca on Jan. 1, 2023. Sauca had been serving since 2020 on an interim basis after former General Secretary Olav Fykse Tveit was named head bishop of the Church of Norway.

Pillay stressed his vision that the WCC member churches and their partners work together to “proclaim the good news of salvation and life in Christ” to the world.

In addition, he said, the WCC must continue and do more to make the “voices of the marginalized and neglected” heard so that economic influence or the power and authority of individual churches is not decisive, but rather a culture of inclusion, diversity and equal rights is created.

In a biblical sense, the humility and self-understanding of Jesus to be a servant must be an example, he said. Pillay put forward a vision of a WCC “that not only creates safe space, but also room in which the marginalized have equal rights and in which the voices of the neglected are heard, respected and valued by the community.”

Ruof is public relations officer and spokesperson for The United Methodist Church in Germany. Contact him at communications@emk.de or newsdesk@umcom.org. Scott is the director of mission theology in the Office of the General Secretary at United Methodist Global Ministries. 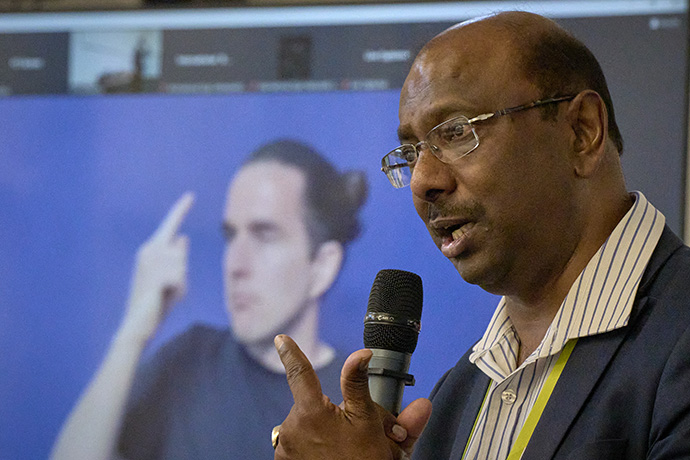 The Rev. Jerry Pillay speaks to the Ecumenical Disability Advocates Network during a gathering on the eve of the assembly. A sign language interpreter can be seen in the background. Pillay was recently elected as the WCC's general secretary. Photo by Paul Jeffrey/WCC.