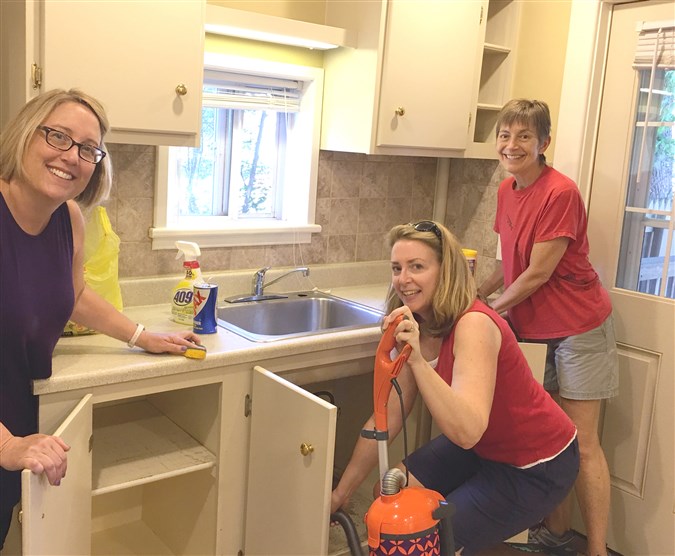 
BY JOANNE S. UTLEY
Editor, The Vison
While many take for granted the ability to be home for the holidays at this time of year, a Syrian refugee family is learning to call a new country home and discovering what it means to celebrate some American holidays.

Mohammed and Noor and their two young children are being resettled in Connecticut through the Westport Interfaith Refugee Settlement (WIRS) project which was initiated last fall through the leadership of Rev. Ed Horne, pastor of the United Methodist Church of Westport and Weston. Horne’s church and six other faith communities in the Westport-Weston Interfaith Council have come together to provide shelter and support for the family who fled their worn-torn country along with an estimate 4.5 million others since the start of the conflict five years ago.

An anti-government uprising in March 2011 that targeted Syrian President Bashar al-Assad has since spiraled into a bloody and devastating civil war in the Mideast country. More than 400,000 Syrians have been killed, according to the United Nations, with some 6.5 million people displaced from their homes inside the country. Much of the capital city of Damascus lies in ruins and recent fighting has targeted Aleppo and environs.

More than 120 volunteers have committed to the refugee project that includes the sponsoring congregations of Saint Luke Parish, Temple Israel, Saugatuck Congregational Church, and Green’s Farms Church, all in Westport; the Society of Friends in Wilton; and an area Muslim community of 15 families.
Volunteers have learned about life and culture in Syria, and some have even learned a little Arabic. They have also been trained to be sensitive to

the challenges and trauma the family has already undergone, and what they may experience in a new country.

Rev. Horne says the project has energized many of the members in his church.

“Quite a few have become involved in an intensive way for the first time,” he wrote in an email. “Also . . . they believe deeply that this is an important statement to make in this time of anti-immigrant sentiments across the country and beyond. They have bonded around putting their belief about Christ’s inclusive welcome into action to provide a home and a future for this beautiful young family.”

John McGeehan, who serves as co-chair of WIRS with his wife, Celeste, was moved to action after seeing the nightly images last fall of refugees crossing the Mediterranean Sea.

“I thought about how privileged I’ve been to be born here,” he said. “I want the same things that they want for their families . . . But the challenge is how do you help the plight of two million people? You help one family at a time.”

“The only wrong thing to do, was to do nothing,” McGeehan said. WIRS agreed to become a contractual co-sponsor in partnership with Integrated Refugee & Immigrant Services (IRIS), based in New Haven, Conn., and are responsible, in accordance with federal guidelines, for helping the family to become economically self-sufficient within six to nine months or less, when federal health benefits and other assistance typically ends.

In mid February 2016, the congregations met and the coalition began to be form. The seven faith organizations signed a letter of participation that included some very explicit obligations, according to McGeehan. “We went a little corporate,” he said. They set up a steering committee with representatives from the faith groups and created task groups including pre-arrival/home, transportation, community guides, translators, health care, public services, employment, and education.

“This is not something one congregation can do. Organization really matters . . .  you need depth . . . you need a bench,” McGeehan said. “Without the coalition this would not have happened.”

IRIS required that the group conduct their own self-assessment process to determine what level of support they could offer and how large a family they would be willing to receive. The coalition was accepted in April 2016, and the family arrived in July. Since fleeing to Egypt five years ago, the young family had been sheltered in more than 20 different temporary residences. But now they are at home in Norwalk, Conn., where Hala, 8, and Yahya, 5, attend public school.

Although the family goes through a rigorous vetting process by the State Department before being allowed to enter the United States, the coalition received very little information about them before they arrived. The key to building trust, and doing it quickly, was day-to-day contact with Celeste McGeehan, a social worker, and an Arabic-speaking male from the Muslim community. The two were able to help the family navigate the inevitable early problems, introduce volunteers, and explain any of the social services. The parents were also quickly ensconced in English as a second language programs for two to three hours a day, six days a week during the summer.

Janis Liu, a member at Westport and Weston since 2005, was eager to help and offered to head the housing task group. One of her biggest challenges was accepting just the right amount of donated furniture to fill the house and organizing its delivery on the same day from six or seven locations.

“It was a joy to see how the house came together perfectly . . . and the overwhelming appreciation from the family,” she wrote in an email.

The Syrian family also got their first taste of an American Thanksgiving in Liu’s home.

“They were lovely guests,” she wrote, noting that they were shocked at the size of the 19-pound turkey. “I have three kids, one the same age as their daughter and they all got along really well . . . They took lots of pictures of the food – especially the turkey. I think the kids’ favorite thing was the whipped cream in a can. They couldn’t get enough.”

Securing employment is key to the family’s self-sufficiency, and Bob Trinka, another of the more than 20 volunteers from the Westport and Weston UMC, has worked directly with Mohammed on that issue. Trinka helps to facilitate a job search group at the church so it was a natural decision to volunteer for the employment task group. After the family first arrived, he devoted one afternoon a week for nearly two months to help Mohammed find a job. He took him to the library to fill out applications and then drove him to job interviews.

“He’s willing to work hard, but it’s not easy to just drop into our society on a parachute – especially where we live,” Trinka said. Mohammed currently works for a grocery retailer, but is being encouraged to explore other job skills he has for working in an export/import business or as a translator.
Part of the ESL assignments has been to watch television, and Mohammed has expressed some concerns about the anti-Muslim rhetoric he heard throughout the presidential campaign, but Trinka has sought to relieve some of those fears.

“This church is ready to stand and hold hands around his house to protect them,” he said. “This family is so lovely and the children are so lovely despite the atrocities they have endured,” Trinka said, noting that this experience with a refugee family has brought members of his church and the coalition closer to the Muslim community. The strength of the relationship was evident at the recent interfaith Thanksgiving service at Temple Israel when Mohammed offered a reading from the Koran.

McGeehan, who has found ways to keep the project volunteers updated through newsletters and audio interviews with Mohammed, says he has two goals: first, a successful assimilation for Mohammed and his family, and secondly, “not waiting 20 years to do it again.”

He believes that the coalition, which renews its commitment every six months, has the resources to increase what they’re doing. In addition to the state and federal support, the coalition raised $12,000 to finance the family for the first six months.

“It needs to be a mix of money and time to scale it up,” McGeehan said. Connecticut is seen as a welcoming state for refugees after Gov. Dannel Malloy accepted Syrian families who had been turned away on arrival in other states. In 2015, 500 refugees were resettled in Connecticut; by the end of 2016, the number is expected to reach 650. McGeehan says the increase is due to co-sponsorships, like the coalition’s through IRIS. The United States admitted 84,995 refugees from around the world in fiscal year 2016, the most since 1999, according to a Pew Research Center analysis of State Department data.

“After, five months we’re in a remarkably good place,” McGeehan said. “If we brought in another family, they [Mohammed and Noor] would be our first volunteers.”

Rev Horne has seen his congregation step up in ways that reinforce their commitment to Christ and the Wesleyan way of service to all of God’s children.
“They have also grown greatly in the cultural awareness, and have come to appreciate the challenges that non-majority people and newcomers face on a daily basis,” Horne said.

McGeehan has spent a lot of time with the family and has grown close to them.

“I could imagine taking those risks for my own family . . . when we help change the life of someone close to us, we change our own lives,” he said. “I hope we’re friends for life.”

For information on the coalition and their efforts, contact John McGeehan, or the Rev. Ed Horne at the United Methodist Church of Weston and Westport, Westport, Conn. The U.S. Department of Health and Human Services also has information available on their Office of Refugee Resettlement web site.

The coalition of the Westport Interfaith Refugee Settlement is open to sharing its origination documents with those considering sponsoring refugees in their communities. Some other bits of advice are:

Resettling Refugees in the U.S.

CWS has a network of its own and affiliate offices spread across the country. A list of those offices is online as well as contact information for the CWS' main office. Contributions to UMCOR’s ongoing work with the refugees/migrants in Europe and the Middle East should be made to the International Disaster Relief Fund, Advance #982450.