What Goes into Funding the Bishops?

What Goes into Funding the Bishops?

The funding of United Methodist bishops is about to be under a microscope.

At its online meeting Nov. 2-5, the Council of Bishops plans to examine both the role of the episcopacy and the financial challenges facing The United Methodist Church as it deals with the COVID-19 pandemic and a possible denominational split.

“In the midst of uncertainty and the many challenges facing the world and the church, we gather as the temporal and spiritual leaders of the church focused primarily on the faithfulness of God even in and especially in times such as these,” said Bishop Cynthia Fierro Harvey, Council of Bishops president, in a statement ahead of the meeting. She also leads the Louisiana Conference, which is grappling with recovery from three hurricanes this year.

The bishops have a number of ideas for stabilizing their finances including reducing the number of U.S. bishops or possibly putting some bishop elections on hold.

Five bishops, including Harvey, also served on the Jurisdictional Study Committee that has submitted to the coming General Conference proposals related to U.S. bishops. Members of the group do not want their work to be forgotten in the bishops’ close examination of finances.

But most church leaders see a need for change.

Even before the pandemic-caused economic crisis, the denomination’s financial leaders warned that the Episcopal Fund was in danger of running out of money within the next four years.

So in May, the bishops decided to create their own task force to develop strategies for moving the fund toward financial sustainability.

GCFA, which administers the Episcopal Fund, plans to consider whatever the bishops recommend in its budget preparations for 2021 and in its budget proposals to the next General Conference. The denomination’s top lawmaking assembly, now scheduled for Aug. 29-Sept, 7, 2021, has final say on how many bishops United Methodists can elect.

The Episcopal Fund covers the costs not only of bishops’ compensation, travel and meetings but also that of the denomination’s ecumenical staff and at least some portion of bishops’ office staff.

Under the denomination’s current 2017-2020 budget, the Episcopal Fund is the third largest of the seven general church funds supported by conference apportionments. It has a four-year budget of about $92 million. 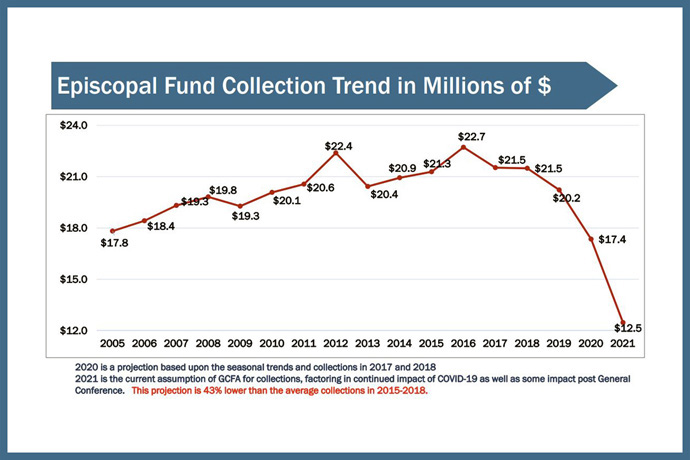 At present, there are 66 bishops supported by the fund — 46 in the U.S., 13 in Africa, four in Europe and three in the Philippines.

Retired bishops sometimes serve in interim roles, as Bishop Warner Brown is doing for the Sierra Leone Conference after Bishop John Yambasu’s death this summer. When that happens, the Episcopal Fund pays the difference between the retired bishop’s pension amount and a bishop’s current salary level.

The quarantine has brought some cost savings on bishop travel and meeting expenses. In the early months of the pandemic, the General Council on Finance and Administration also obtained a $1.2 million loan for the Episcopal Fund through the U.S. Paycheck Protection Program. The agency expects that loan to be forgiven, essentially becoming a grant.

When the fund runs out of money depends on multiple factors including apportionment collection rates, conference contributions to bishop office expenses and most significantly, the impact of a potential split on apportionments.

One of the separation proposals is the Protocol for Reconciliation and Grace through Separation, a mediated agreement that, if accepted, would allow churches and conferences to break away to form a new, traditionalist denomination.

However, GCFA does not know how many churches or conferences would vote to depart if such a plan wins General Conference approval; nor is it clear how many bishops would move to a new denomination if given the opportunity.

Another big question is just how many episcopal areas General Conference will approve when it next convenes. The 2016 General Conference instructed the GCFA to budget for five additional bishops in Africa, so those new bishops are part of the finance agency’s projections.

The Jurisdictional Study Committee’s proposals to General Conference offer an alternative to simply reducing the number of bishops.

The 2016 General Conference authorized the formation of the committee to examine “the best number and boundaries of jurisdictions and episcopal areas in the United States.” In addition to five bishops, the 16-member team included five lay people and five clergy and a lay chair.

The five jurisdictions, each comprising multiple annual conferences, are the denomination’s intermediate organizational structures in the U.S. Under the Book of Discipline, the denomination’s policy book, each jurisdiction currently has a minimum of five bishops with the additional number of bishops determined by a membership formula.

The committee proposes that the Episcopal Fund continue to cover the costs of a minimum of five bishops in each jurisdiction, and that annual conferences assume the costs of any additional bishops as well as all bishops’ office staff.

Most conferences cover at least some of the bishops’ office expenses. Lonnie Chafin, a committee member and treasurer for the Northern Illinois Conference, estimates that having U.S. conferences take over all of their office costs would save about $3.9 million each year in Episcopal Fund expenditures.

He added that the committee’s legislation also would require each jurisdiction to evaluate the costs of adding an episcopal area before deciding to have one.

“At the core of our plan is that the number of bishops in each jurisdiction should be set only after a thorough analysis of the missional needs,” Chafin said. “Having the decision by a formula, as in the current Discipline, will always make for a mismatch in the number funded with the number needed.”

The GCFA board has not taken a stand on the Jurisdictional Study Committee’s legislation.

However, the board has options if it looks like the Episcopal Fund is about to be completely depleted, said Sharon Dean, the agency’s director of communications.

The board could urge that all Council of Bishops meetings be held virtually. It could also adjust the amount of office support and housing allowances provided annual conferences. That currently amounts to about $5.7 million each year. It could alter bishop compensation and benefits, which currently total about $11.4 million annually.

Finally, she said, GCFA could ask General Conference to approve higher apportionments to support the bishops and their work.

Hahn is a multimedia news reporter for United Methodist News. Contact her at (615) 742-5470 or newsdesk@umnews.org. To read more United Methodist news, subscribe to the free Daily or Weekly Digests.