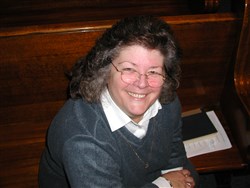 Let us remember with thanksgiving the life and ministry of Louise Dominica Thomas who received the gift of life on October 26, 1944 and entered eternal life by the grace of God on April 17, 2015, at the age of 70.

Louise was granted the License to Preach in 1982, received Deacon’s Orders and became an Associate Member of the NY Annual Conference in 1989. She served until 2009 when poor health resulted in entering the retired relationship.

At the time of her death Louise resided in Otisville, New York. She is survived by her husband William Thomas, daughters Lisa Brennan and Dawn Alvarez; a sister, nieces, nephews; eight grandchildren and seven great grandchildren.

A funeral service was held on April 20, 2015 at the Ellenville United Methodist Church in Ellenville, NY. Larry Powell, pastor of the church and The Reverends Ken Cottington, a longtime friend for whom Louise served as a mentor, and Jim Moore, District Superintendent, participated in the service. Louise’s earthly remains were buried at the Fantinekill Cemetery in Ellenville.

Donations in memory of Louise Thomas may be made to the Ellenville Church, PO Box 591, Ellenville, NY 12428; or The Sarcoma Foundation of America, 9899 Main Street, Suite 204, Damascus, MD 20872; or any animal shelter or charity of the donor’s choice.