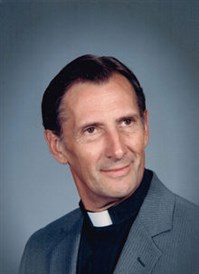 Let us remember with thanksgiving the life and ministry of Russell D. Goodwin. Russell began life in this world in Yonkers, New York on February 4, 1933. His earthly journey ended at age 82 on April 18, 2015 when the promise of everlasting life was fulfilled.

Russ Goodwin spent his early childhood in Hudson Falls and his teenage years in Staten Island, NY. After graduating from Zion Bible Institute, he followed in the footsteps of his parents when he began his ministry with the Assemblies of God. In 1952 he received a License to Preach and was ordained two years later. In 1967 he joined The United Methodist Church and the New York Conference granted Rev. Goodwin probationary membership in 1970 and full membership two years later.

Russell is survived by his beloved wife Maria and their children David, Debra, Dean and Jason, plus five grandchildren and a great-granddaughter.

A celebration of Rev. Godwin’s life will be held on May 2, 2015 at 2 PM at Gramling UMC, 14941 Asheville Highway, Gramling, SC 29348. The service will be led by the Reverends Rebecca Wilkins and Don Hope.

Memorial gifts in honor of Rev. Russell Goodwin may be presented to the Gramling United Methodist Church or the Lymphoma Society, 1247 Lake Murray Blvd., Irmo, SC 29063.