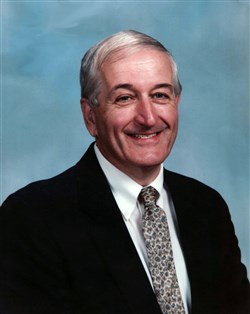 Let us remember with thanksgiving the life and ministry of the Reverend L. Lester McGonagle. Les was born in Punxsutawney, Pennsylvania on November 12, 1930 and died in Lakeland, Florida on April 18, 2015 at age 84.

“Les” as he was known, received an undergraduate degree from Penn State University prior to his seminary education at Drew University School of Theology. In 1955 he received a Local Preacher’s License in the Erie Conference with an appointment to attend school. Deacon’s Orders and Probationary Membership followed two years later in the New York Conference, followed by Elder’s Orders and Full Membership in 1958.  The next year he became a full member of the Pittsburgh Conference and returned as a full member to the New York Conference in 1959. His pastoral service record of 42 years includes the following appointments: Lake Mahopac and Mount Hope (1957), Indiana, Associate (1959), Buchanan & Boscobel (1960), Buchanan (1962), Lynbrook (1968), North Yonkers: Community (1981) and Hyde Park (1989) until his retirement in 1997.

When he retired, he and his wife, Martha relocated to Lakeland, FL, and continued to serve God by actively volunteering in his church, College Heights United Methodist Church in Lakeland.
Three brothers died before Les, as well as his son Stephen. He is survived by his loving and devoted wife, Martha, a loving daughter Becky and five grandchildren.

A gathering of family and friends celebrated his life and ministry on April 22, 2015 at the College Heights UMC in Lakeland. The family announced a memorial service will be held in Mahopac, NY in the near future.