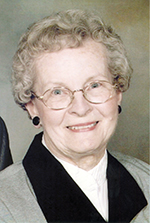 Let us remember with thanksgiving the life and ministry of Wilmetta Turkington Abel. She was born on March 4, 1924 in Princeton, NJ to William and Emily Turkington and grew up in Wilmore, KY. Her father was on the faculty of Asbury College, then Asbury Seminary, and finally was Dean of the Seminary. Wilmetta graduated from Asbury College in 1945 and married Paul Frederick Abel, also an Asbury graduate, that same year. She worked in the college library while Paul attended Asbury Seminary. Paul and Wilmetta moved to New York in 1949 for Paul to do graduate work at Columbia University. He was ordained in the NY Conference of The United Methodist Church and, together, they began almost 40 years of ministry and service in the New York City area. Wilmetta also worked for several years as a receptionist in a hospital-based Physical Therapy department in Port Chester, NY. They had two children, Rick and Carol.

After Paul’s retirement in 1987, they moved to Etowah, NC in 2004 to be near their daughter, Carol Wellman, and her family.

Wilmetta enjoyed gardening, sewing and crafts. She was a gracious hostess and a leader and active participant in the life of the churches she and Paul served. She gave generously of her time and resources to help those in need in her communities. She was a loving and devoted mother and grandmother. Above all, she served her Lord well and endured the last few years of physical decline with her usual grace and sweetness. She died peacefully in her sleep on March 30, 2015 at 91 years of age. Wilmetta was predeceased by her parents, husband (2007, age 85), and their son, Rick.

A memorial service was held on April 13, 2015 at Epworth UMC in Durham, NC. Burial was in Wilmore, KY. Memorial gifts may to be made to the Wilmetta Abel Memorial Fund at Fishhook International at PO Box 910691, Lexington, KY 40591 or online at fishhook.org. Funds designated in Wilmetta’s memory will benefit a Christian ministry serving elderly widows in India.