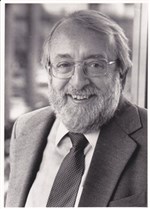 Let us remember with thanksgiving the life and ministry of the Reverend Edward F. Dobihal, Jr. who died on May 30, 2015. His pastoral service record began in the Baltimore Conference with ordination as a deacon and probationary member in 1951 when he was appointed to attend school. The following year he was appointed to Jersey City, NJ: Lafayette Church. Elders orders and full membership were granted by the Baltimore Conference in 1953. His first ministry as a chaplain began with an appointment to St. Elizabeth’s Hospital in Washington, D.C. in 1955 where he became the Director of Protestant Chaplaincy Training (1961). In 1964 Rev. Dobihal relocated to Yale-New Haven Hospital and became a full member of the New York Conference in 1966. His ministry continued in New Haven; in 1973 he became the Director of the Department of Religious Ministries until retirement in 1989 with 38.5 years effective service.

Ed Dobihal was the husband of Shirley V. Dobihal for 67 years. He was born June 5, 1927 in Baltimore and received a doctorate degree from Drew University in 1965. He is remembered as “a visionary which allowed him to look at his world and start projects that others couldn’t see or believed could be done.” He founded Yale New Haven Hospital’s Religious Ministries Department, now called Spiritual Care, as well as America’s first Hospice.  Ed and Shirley are the parents of four children, 10 grandchildren and 3 great grandchildren.