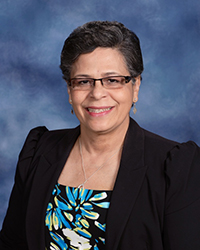 Rev. Plaud was born in Puerto Rico, where she became a teacher, offering instruction in different subjects at a variety of grade levels. Her passion for teaching led to her ministry calling. She moved to Lancaster, Penn., to pursue a master’s in divinity degree at Lancaster Theological Seminary, and served as pastor of El Redentor UMC there.

In 1985, she moved to New York where she was appointed to serve the United Methodist Church of Co-Op City, then a Spanish-speaking congregation meeting in a community center. In her long tenure with the church, Rev. Plaud oversaw the construction of the church’s own building, the creation of an English-speaking congregation, and the founding of Crescendo Christian Music School.

Throughout her career, Rev. Plaud also worked as an editor of Spanish resources for the General Board of Global Ministries, and served on the Spanish Advisory Committee for “Intérprete” magazine with UM Communications. She also served on the Commission on the Status and Role of Women, the conference Board of Ordained Ministry, and was president of the conference Hispanic Council. Rev. Plaud was also named as chaplain for the Co-Op City Department of Public Safety.

Rev. Plaud is survived by daughters, Natalia and Claudia Celeste Alvarez-Plaud. A funeral was held at the church on June 9, with Bishop Jane Allen Middleton officiating.