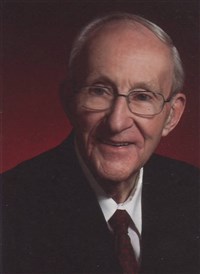 Robert William Smyres was born in Ithaca, New York on September 22, 1922, the eldest child of the Reverend Roy Smyres and Esther Montgomery Smyres.

In 1924, Bob moved with his parents to Elizabethville, Belgian Congo where they served as missionaries until 1929, when they returned to the United States.  If we do not know what influence his father’s vocation had on Bob’s future calling to be a missionary, we are confident that God knows.

Bob earned his BA degree from Ohio Wesleyan College before entering Garrett Theological Seminary in Evanston, Illinois where he was awarded a Bachelor of Divinity degree.  When he was a seminarian he met Mary Beth Stevenson who was attending Northwestern University.  They were married on January, 2, 1946. They are the parents of Paul Smyres, Karen Wolner, Margaret Smyres and Philip Smyres.

In February 1949 with their three-year-old daughter, they left NY to serve as Methodist missionaries in Mathura, India.  There, Bob served as the administrator to a boys’ high school and as a District Superintendent for several village churches.  While on furlough in the US, Bob received his Master’s in Divinity and a Master’s in school administration at Columbia University.

In 1960, Bob was sent to Bombay where he served as Liaison Treasurer for the Board of Missions.  After their next furlough, the family went to Lucknow, where Bob was the administrator of Lucknow Publishing House, which printed literacy and religious materials.

In 1966, the family returned to the US and Bob decided to retire from the mission field.  He subsequently served as pastor in several New York churches: Hancock, Warwick and Kingston: St. James and East Kingston. He was appointed district superintendent for the Hudson North District of the New York Annual Conference, 1980-1986. He was a member of the cabinet serving with bishops Nichols and White.  Prior to his retirement in 1991, Bob was appointed to Wilton: Zion’s Hill.

All who served with Bob join in saying, “Well done, good and faithful servant!”