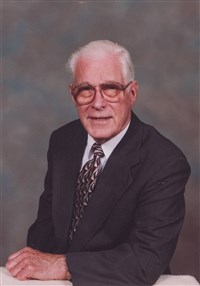 Let us remember Ivan Francis Gossoo retired elder of the New York Annual Conference died on July 22, 2014 at 94 years-of-age. Ivan and Dorothea Mathena were married in 1944; they are the parents of Burton Gossoo, who lives in Hampton Bays, NY and Lynnea Jones of Wolcott, CT.  Dorothea died nearly 10 years ago on August 4, 1994.

Ivan received a Local Preacher’s License in 1940; seven years later he was ordained deacon and began his probationary membership which climaxed with the reception of elder’s orders and full membership in the former New York Annual Conference in 1949. His appointment history began in 1945 when he served the White Sulphur Springs & Harris churches, four years later the Gossoo’s moved to Kingston: Trinity and South Rondout churches; from 1954-1961 he served the Katonah church; his next appointment was to Peekskill: First effective January 1961, at the beginning of 1964 church had a new name, “United” Methodist Church. Later that year he began his appointment to the Wethersfield Church until he moved to his final church, Southampton on Long Island, 1973-1985. Ivan helped set the standard as an itinerant UM pastor as revealed in a comment from Rev. Jack King to the Secretary, “Ivan was my predecessor at Southampton, and I grew fond of him.”

Due to a stroke in July, he changed his residence to The Center for Nursing and Rehabilitation in Hoosiac Falls, NY. The following quote is from a brief article Ivan submitted to the 2013-2014 edition of The Chronicle, Dr. Audrey E. Bowles, editor, published by the Retired Ministers' and Spouses' Fellowship: “At 94 things continue to slow down. Family and friends visit often; keep my spirits up and my humor intact.”

A memorial service is scheduled for September 20, 2014 at the Berlin UMC, Berlin, NY. The family requests that any memorial contributions be made in Ivan Gossoo’s name to the Berlin United Methodist Church, 17 So. Main Street, Berlin, NY 12022.