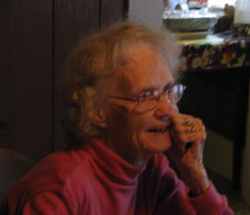 Cherry was born in Cuero, Texas and graduated from high school in San Antonio, and went on to be trained as a bookkeeper. Later she served on the New York State Committee to establish the Girl Scout “God and Community Award.” There were many ways she was involved in her community including the Cuero chapter of AARP that she served as President, Vice President, Secretary and Treasurer; the Area Agency on Aging, etc. Most recently at the Cuero Nursing Center, Cherry served as President then as Vice President of the Resident Council, and danced the Hula on the winning float in the Small Business category of the 2012 Turkey Fest Parade.

Each of Cherry’s husbands, Anthony Piscetta and Rev. Chester E. Grossman, predeceased her. Rev. Grossman retired in 1973 and died ten years later in 1983, granting them a marriage of 14 years. She is survived by her daughters: Virginia “Ginny” Ludwig of Connecticut, and Evelyn “Petie” Hebenstreit of Virginia, and their husbands.

Wherever Cherry Grossman lived she taught Sunday school classes at all age levels, and served in church, community and senior organizations. Cherry’s life was filled with service to her Lord, and she enjoyed the journey to its fullest. It may be said of Cherry, “She embodied Jesus' claim, ‘I have come that they may have life and have it abundantly.’”