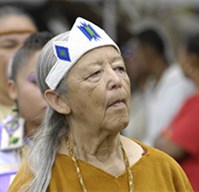 Let us remember with thanksgiving the life and ministry of Elder Elizabeth Thunderbird Haile, a respected elder of the Shinnecock Indian Nation, who died Friday afternoon, August 21, 2015. Elizabeth Thunderbird Haile provided the welcome from the Shinnecock Nation and blessing at the Act of Repentance Service on Friday, June 12, 2015 at the New York Annual Conference.

Born in Southampton to Shinnecock parents, Ms. Haile received her bachelor’s degree in education from the State University of New York at Oneonta Teachers College. She also received a master’s degree in recreation education from New York University. In 2002, Ms. Haile received an honorary doctor of humane letters degree from the former Southampton College. For the past five decades, she wore several different hats as a dance teacher, a consultant in Native American studies, and an active member of both the Shinnecock Presbyterian Church and the United Methodist Church of Southampton.

She was also a founding member of the Hayground School in Bridgehampton, and in the past had opened the annual Shinnecock Pow Wow with a ceremonial dance. Additionally, she served on the Shinnecock Tribal Council, Land Defense Committee, Cultural Center and Museum Board.

Ms. Haile, 85, was married to Richard Haile for nearly 60 years and together they had four children, 10 grandchildren and four great-grandchildren. She had a love for cultural dances and met Mr. Haile at an international folk dancing class in Schenectady in 1952.

The viewing for Elizabeth Bess Chee Chee Thunderbird Haile will be held on Tuesday, August 25 from 11am until 2pm at the Hamptons United Methodist Church in Southampton, NY, Leslie Duroseau, pastor. The funeral service will follow at the church at 2pm on Tuesday.