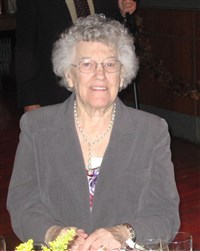 Mary Elizabeth Stevenson Smyres passed away on August 9, 2014. She was born in Gainesville, NY on May 27, 1923, the third child of Charles Roberts Stevenson and Alta Nay Munns Stevenson.

The family moved to Illinois when Mary was still a small child. Her father had been working for Cornell University as an expert in potato diseases. He started a truck farm in Illinois as a way of doing more research for his doctoral thesis. The depression got in the way and the family had to abandon the farm. Charles and Alta moved closer to Chicago to obtain jobs in order to care for their four children.

Mary Beth attended Northern Illinois College before going to Northwestern University in Evanston, IL. That is where, in 1944, she met Bob Smyres. They were married in January 1946. In 1949, with their three-year-old daughter, Karen, they left for India to serve as missionaries.

Mary Beth involved herself in women’s work while in India as well as volunteering at Woodstock School which the Smyres children attended. She often had to plan for room and board for the many visitors to the mission posts, a job she handled with much grace.

When the family returned to the United States in 1966, Mary Beth went to work as a teacher in the town of Hancock, NY where Bob was pastor. She taught Kindergarten there while obtaining her Master’s degree in education at SUNY Oneonta. When the family moved to Warwick, NY, Mary Beth took a job teaching second grade. The next move took them to Kingston, NY. Mary Beth worked as a substitute teacher mostly teaching high school history. She retired from teaching in 1982.

She and Bob moved to Penney Retirement Community in 1995.

A memorial service was held for Mary Beth and her late husband, the Reverend Robert Smyres who died on May 14, 2014, at Penney Farms, FL on August 16, 2014. Memorial donations can be made to Community Hospice Foundation (DonateNow.CommunityHospice.com), the PET Project Florida, PO Box 919, 4364 Lewis Avenue, Penney Farms, FL 32079 (pet Florida.org) or Alzheimer’s Association (alz.org).