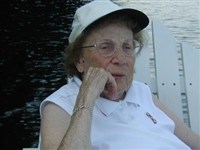 Let us remember Dorothea Mitchell Queen, who passed away on August 10 in Groton, NY.  She had lived a century, and she was content to move on.  Dorothea was born on November 1, 1913, and grew up in Jackson, Mississippi. There she attended Millsaps College, a United Methodist related college, and Chicago Musical College where she received Bachelor’s Degrees in Music and Music Education. In 1940, she moved to NYC to attend Union Theological Seminary School of Sacred Music, where she earned a Masters in Sacred Music.  It was there that she met Merritt B. Queen, and they were married in 1941.

Dorothea began her teaching career in Illinois, teaching music, Latin and French. Following her graduation from Union Seminary, she taught music in public schools on Eastern Long Island. For 18 years she taught at Cantiague Elementary School in Jericho, NY, where she directed numerous musicals, including well-known works by Stravinsky and Gilbert and Sullivan.  She saw that as the most exciting period in her professional life because she was able to bring together parents, teachers, administrators and children in a creative collaboration. During this time, Dorothea also founded the Long Island chapter of the Orff-Schulwerk Association, promoting the use of percussion instruments in children’s music education.

After retiring from public education, Dorothea established a private studio in her home in Northport, NY, where she introduced very young children and their families to the joys of music using the Suzuki method.  Many of her students went on to pursue their musical training in college and beyond.  At age 81, Dorothea closed her studio and moved with her husband to Ithaca, NY.

As the wife of a Methodist pastor, Dorothea served with Merritt in seven churches in the NY metropolitan area. She conducted numerous children’s choirs and established a hand bell choir. She served as vice-president of the Women’s Society of Christian Service in the NY East Conference of The Methodist Church.  After moving to Ithaca, Dorothea and Merritt became active members of Forest Home Chapel UMC.  Rev. Merritt Queen retired in 1980 following 41 years of service in the NYE and NY conferences; he died in 2011.

Dorothea is survived by her three children, Christopher, Bethany and Jeffrey, 4 grandchildren and 1 great grandchild.