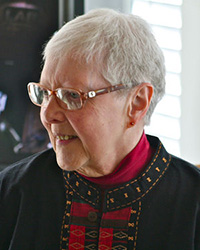 Let us remember Juanita Valyou Middlebrook, daughter of Ralph Valyou and Florence Milton, who received the gift of life on July 19, 1933.

Juanita worked for many years in the pediatric department of Sharon Clinic before opening her own retail business. In 1978, Juanita returned to school to pursue a calling to the ministry. She completed her Bachelor’s Degree at the College of New Rochelle and received a Master of Divinity from the Drew University Theological School. At the annual conference of 1982 Juanita was ordained deacon and received as a probationary member of the New York Conference; elder’s orders and full membership in the conference followed in 1985. The history of her episcopal appointments include: Federated Church of Kerhonkson (1983), Goshen (1989), Disability and Leave of Absence (1992), New Beginnings Ministries (1996), Bay Shore Interim (4 months in 1999), Pine Plains (1999), and Retirement (2004) with an appointment to Hillsdale: First & North Hillside until 2011. Following her “second retirement” in 2011, she continued working as a spiritual guide and counselor to those in need.

Juanita is survived by her three children, Lance, Kim and Todd, five grandchildren and four great-grandchildren. She was predeceased by her son, Keith.

Rev. Middlebrook passed away at age 81 at home on Saturday, October 11, 2014. Juanita had an adventurous spirit and loved to travel. Her final trip abroad was to Tuscany, Italy in June. She was an inspiration to everyone who knew her and she will be greatly missed.

The calling hours will be Friday, October 17, 2014 from 2-4 and 6-8 pm at Peck & Peck Funeral Home in Pine Plains, NY. The Service of Death and Resurrection will be held on Saturday, October 18 at the Sharon United Methodist Church, 112 Upper Main Street, Sharon, CT 06069.