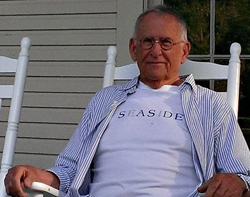 Let us remember Jack William Henry Mattair, Retired Elder, who died at his home in East Hampton on October 10, 2014 at 81 years-of-age.

Jack Mattair was born on August 14, 1933, in Charleston, South Carolina. He grew up in Port Washington, NY where he was raised by Mabel and Royal Burlison, who had adopted him.

A graduate of the University of Florida, Mr. Mattair earned a Master of Divinity degree from Emory University. Jack’s clergy record began in the Florida Conference with a License to Preach (1951); seven years later he received Deacon’s Orders and was admitted as a Probationary Member. The New York East Conference granted him Elder’s Orders and Full Membership in that conference (1962).  Rev. Mattair entered the retired relationship with the New York Conference (2004) following 45 years of service as an ordained minister.

His service record began with an “At School” appointment (1958), followed by Brooklyn: Park Slope (1960) and another “At School” (1964). His next and final church appointment was to Sea Cliff (1964). Three years later he was appointed to serve as a pastoral counselor with the American Foundation of Religion and Psychiatry; in 1970 he was promoted to Director of Pastoral Care. By 1975 Rev. Mattair received a master’s degree and held a duel role as pastoral counselor and faculty member at the Research Center for Modern Psychoanalytic Studies in Manhattan.

“A lover of the arts, in particular the ballet and the symphony, he will be remembered by his friends for his kindness, generosity, and big heart,” his family said.

Rev. Mattair is survived by two nephews, Bryan Brett of Beavercreek, Ohio, and Gary Brett of Balchun; his partner of 40 years died, before him.

Information regarding funeral arrangements is not available at this time.