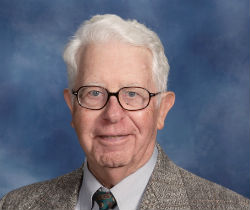 The son of the late Reverend Robert B. and Dorotha Guice, Dick was born in Brooklyn, NY.

Rev. Guice was committed to Conference Camping Ministries including all three sites in New York: Quinipet on Shelter Island, Epworth in High Falls, and Kingswood in Hancock. Memorial gifts in the name of Richard Guice may be given to the New York Conference Camping Fund, 20 Soundview Avenue, White Plains, NY 10606.

In addition to his beloved wife Jean, Dick is survived by his sons, Bryan T. Guice of Denver, CO and Jon R. Guice and his wife Karin of San Diego, CA; his daughter Joy M. Guice of Boston, MA; two grandchildren, Erik and Alexander Hagstrom; his twin sister, Ruth Guice of Florida; a niece and nephew.

Cremation will take place at the Cedar Hill Crematory in Newburgh, NY. Visitation will be held at St. Paul’s UMC, 58 West Main Street, Middletown, NY on Saturday, October 25, from 1 to 3 P.M. A Celebration of Reverend Richard Guice’s Life will begin at 3 o’clock at the Church. The Reverend Charles Ryu, pastor, will be the liturgist and Superintendent Jim Moore of the Catskill Hudson District will serve as the preacher. All are invited to attend the meal after the service in the fellowship hall.
Jean requests that clergy vest for the service wearing white, red or festival color stoles. Pastors are invited to SING the anthem, "God so Loved the World." Please contact Pastor Charles Ryu indicating your intention to participate, Charles.Ryu@nyac-umc.com.