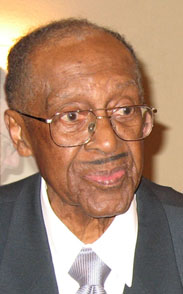 Let us remember with thanksgiving the life of the Reverend Dr. William Marcus James who died peacefully on January 18, 2013 at 97 years of age. Rev. James was born in Mississippi on June 4, 1915. He received his license to preach in Lexington, KY in 1936 and was ordained a deacon in the South Indiana Conference in 1938. In 1940 Rev. James was ordained Elder in the New York Conference and was appointed to East Calvary (Harlem) the same year. In 1944 he was appointed to the Trinity (Morrisania) Methodist Church in the Bronx in a changing neighborhood. In 1952 he began serving Community Methodist Church in Harlem, which later became the Metropolitan Community United Methodist Church in 1971. Rev. James ministered to this congregation for 33 years until “retiring” in 1985, but continued his ministry to young people and to the Harlem community.

Rev. James served in New York City and Harlem during the Civil Rights movement, the urban rebellion and the Vietnam War. He led nearly 100 men and women into the ministry of The United Methodist Church as well as other denominations.

His ministry reached beyond the local church. He was a delegate to eight general and jurisdictional conferences, where he was a key leader in the struggle to end the Central Jurisdiction, the segregated jurisdiction of the Methodist Church. At the Conference level, Bill could always be counted on to fight for racial equality and to oppose war. He was also an early champion of gay and lesbian rights. Bill served on the board of the United Methodist City Society, a mission agency of the church in the metropolitan region for seventy years, where he helped shape the church’s response to the urban crisis.

Bill was predeceased by his wife of over 60 years, Juanita and his son, Edward James. He is survived by his daughter-in-law Jade, two grandchildren, Ryan James and Kyle James and two great-grandchildren, Khloe and Makhi.