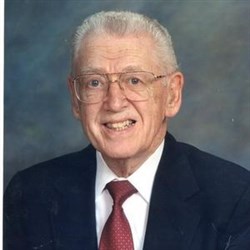 Let us remember with thanksgiving the life and ministry of the Rev. Vincent William Watson, beloved husband, father, grandfather and faithful minister of Jesus Christ who entered the church triumphant on August 7, 2013. “Vin” and “Jackie” (Jacquelyn) were married in 1942; they celebrated seventy-one years of marriage on March 3rd.

Rev. Watson’s ministry began in 1942 when he received a Local Preacher’s License in Tennessee and Deacon’s orders in California in ’46. He came east to the New York East Conference and was appointed to Bellport (’49) and St. Mark’s Church, Rockville Centre as an associate pastor (‘50). In 1952 he was ordained an Elder of the church followed by Probationary Membership the next year, becoming a Full Member in 1956. His pastoral service included Forestville: Asbury (’57), New Britain: Trinity (’64) and Clinton (’74). Although he retired in 1981, he was appointed to the Bloomfield Church (’83-’84). Vin remained active for a number of years as Minister of Visitation for the Plainville and Asbury United Methodist Churches. His daily Dial-A-Lift telephone ministry was initiated in Forestville (1955) and continued beyond his retirement when he converted his messages to email with a mailing list of 250. Vin’s final message was recorded two days ago on Monday, August 5th.

Vin Watson enjoyed a variety of activities that included researching his family genealogy (ultimately tracing his ancestry to the fifth century…happily adding a granddaughter in law, a grandson in law and four great grandchildren to the family tree. Through the 1990’s he enjoyed gardening, fishing and golfing. A great fan of the Boston Red Sox, Vin spent his last evening before his death watching his favorite baseball team win.

A Service of Death and Resurrection will be held at the Asbury Church, Forestville (note address above), on Sunday, August 11, 2013 at 2:00pm. No calling hours are planned.