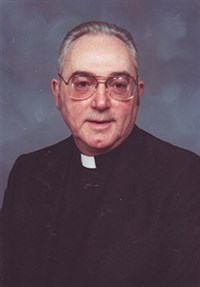 Let us remember the Reverend John G. Wall who died on August 26, 2013 after a lengthy illness. He was 85 years old at the time of his death.

Arrangements to celebrate Rev. Wall's life and ministry have been announced for this Saturday, August 31, with calling hours from 10:00 to 11:00 a.m. at the Colchester Community United Methodist Church, 15151 State Highway 30, Downsville, NY 13755. A memorial Service of Death and Resurrection will held at the church beginning at 11:00 a.m., followed by a reception at the American Legion Hall in Downsville. The committal service will be private at a date to be determined.

John and Marjorie Ann were married in 1957 and they are the parents of one son, Gordon Wall. Expressions of sympathy and concern may be sent to the family at: P.O. Box 323, Downsville, NY 13755.

Rev. Wall’s response to God’s call to ordained ministry began when he obtained a License to Preach in 1955 through the New York East Conference. Three years later he received Deacon’s Orders and became a Probationary Member of the Detroit Conference where he received Elder’s Orders and Full Membership in 1960. Two years later, he returned to his home conference (NYE) to be appointed as an Associate Pastor at Port Washington. His itinerant ministry included appointments to Roosevelt (1964), Cutchoque (1967), Downsville (1970), Staten Island: Woodrow (1978), South Meriden: Trinity (1980), Red Hook & Milan (1986) and entered the retired relationship in 1993.

According to the Rev. Dale Ashby, pastor of the Colchester Community Church, John had a heart for town and country ministry, “He would go out to the farms to bring communion to some of the farmers who were unable to get to church because they needed to attend to the cows every morning” (editorial comment: How Wesleyan is that?). “John and Marjorie retired to Downsville and were both active members of the church…John was an avid reader and enjoyed a diversity of music. Music by Andrew Lloyd Webber was a particular favorite. John was also a consummate storyteller and he always had a story to tell whenever I visited with him.”

This year the Walls were included in the publication, The Chronicle, edited annually by Dr. Audrey E. Bowles for the Retired Ministers’ and Spouses Fellowship of our conference. The status of John and Marjorie Ann included this note, “All in all they are blessed by the Lord every day, from the store employees who help transfer groceries to the car trunk; to the strangers who offer help if they see you are having trouble; as well as church friends who offer their services, and the choir that visits to sing the old hymn favorites in our great room.”