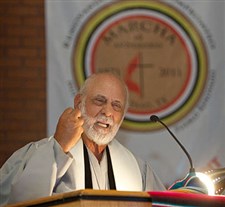 Let us remember with thanksgiving the life and ministry of the Reverend Hector Manuel Navas who died on Wednesday, September 18, 2013 at 79 years of age. Calling hours and a Service of Death and Resurrection were held at the First United Methodist Church of Tarpon Springs on Sunday, September 22. The committal service was held on September 23 at the Florida National Cemetery, Bushnell, Florida. Hector was a U.S. Army veteran.

A Retired Elder at the time of his death, Rev. Nava’s ministry began in the Illinois Conference of the Evangelical United Brethren Church. He received a License to Preach in 1959 followed by Probationary Membership in 1961. Rev. Nava’s passion for worldwide mission began with service on the EUB Board of Mission in 1965, and in that year he was ordained Elder and became a Full Member of his conference. Three years later (1968) he transferred his membership to the Florida Conference of the UMC and was appointed to the National Division of the Board of Global Ministries. In 1976 he transferred his membership to the New York Conference continuing his service with the GBGM until 1985. That year he joined the conference staff as the Associate Program Director for Hispanic Ministries. Seven years later he received his first pastoral appointment which was to Manhattan’s Broadway Temple, English and Hispanic; five years later (1997) he entered the retired relationship. Rev. Navas was one of the founders of Metodistas Asociados Representando la Causa Hispano Americana. The following tribute was made by an officer of MARCHA: “With his death MARCHA lost one of its most loyal members and the UMC lost one of its most effective Hispanic leaders.”

The family requests memorial donations be made to the TSHS Marching Band for the Macy’s Thanksgiving Day Parade www.marchtomacys.com; Shepherd Center www.tsshepherdcenter.org; Church on the Bayou www.churchonthebayou.org or Children’s Village www.childrensvillage.org.