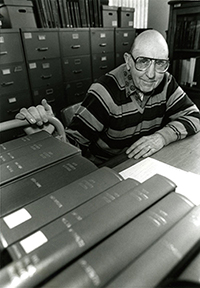 Let us remember with thanksgiving the lives of the Reverend Dr. Barent Johnson and his wife Geraldine Johnson. Rev. Johnson was born on April 16, 1921 and died on September 25, 2013 at the age of 92 years. Rev. Johnson died in his retirement community in Basking Ridge, New Jersey. News of Mrs. Johnson’s death arrived at the conference secretary’s office at the same time as the announcement of her husband’s death. She was born on October 23, 1923 and died on November 4, 2012.

Barent was born in Aberdeen, Washington and was raised in Silverton, Colorado. He attended the College of Puget Sound where he met his future wife, Geraldine. After college he and his wife moved to Illinois where he enrolled in Garrett Biblical Institute (now Garrett Evangelical Seminary) in Evanston.

Rev. Johnson entered the ministry of the Methodist Church in 1942 serving as a local pastor in what is now the Pacific Northwest Conference. In 1945 Rev. Johnson moved to the former Rock River Conference (now Northern Illinois) where, in 1950, he became a probationary member, and a full member in 1952. His appointment history as a pastor in NY includes the former New Haven: Meridan, Meriden: Trinity and South, and Easton: Jesse Lee. He entered the retired relationship as a member of the New York Conference in 1991.

Drew University recently issued a tribute to Barent Johnson, “Beloved Registrar Passes Away Having Fulfilled a Multitude of Roles over Three Decades. Colleagues say he personified all that was Drew.” Drew President Vivian A. Bull said, “It was most unusual for a registrar to be given an honorary degree, but that was in recognition of his outstanding contribution to Drew’s academic community.” Rev. Johnson retired from Drew University in 1986 but later returned and served as their archivist from 1988 until 1993. (Photo from www.drew.edu)

Rev. Dr. Johnson is survived by his daughter, Kathleen Johnson Caccavale, and several nieces and nephews. A memorial service will be held in the spring at the United Methodist Church in Madison, New Jersey. Barent endowed a garden in his wife’s name at the Madison church, 24 Madison Avenue, Madison, NJ 07940; he requested that memorial gifts be sent to the church to continue the perpetual care of the Geri Johnson Garden.