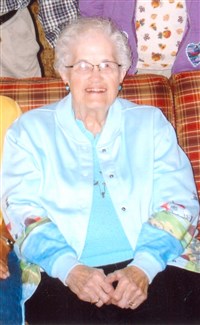 Let us remember Sarah Wilson Ohms who died on December 21, 2014 at 94 years old. Sarah was born in Paradise, PA on February 26, 1920 to Rev. Charles and Alice Burns Wilson. She spent her early years in MA and RI. Sarah Ohms married the Reverend Frederick John Ohms on September 6, 1943.

Rev. Ohms entered the ordained ministry through the Atlantic Conference of The Evangelical Church. This denomination joined the United Brethren in Christ to become the Evangelical United Brethren Church, which eventually merged with The Methodist Church to become The United Methodist Church. As an EUB pastor he served churches in Philadelphia, PA (Saint Paul’s) where son David was born. The family moved to Forest Hills, NY (St. Paul’s) where son Edward was born and to Queens Village (Calvary) in 1952. In 1964 Rev. Ohms became a member of the NY Conference; he was appointed as assistant pastor to Hanson Place Central Church in Brooklyn. Two years later he became the pastor of Bethelship Norwegian Church in Brooklyn which became a two-point charge (1982) with Fisherman’s Church in Brooklyn. Rev. Ohms died in 1985.

The family moved to Lake Hopatcong, NJ in 1974. Sarah was employed for many years by the National Council of Churches and then by the United Presbyterian Church, USA. After her husband’s death, she moved to Albuquerque, NM, where she lived until she died.

Sarah was an accomplished musician playing both the piano and organ. She was also a talented quilt maker, painter and ceramic maker. She enjoyed traveling and visited many places in Europe, India and Hawaii. Her sons learned how to cook at home (a skill which has served them well for many years).

Sarah Ohms’ brother David Wilson survives along with her sons David and Edward and two granddaughters.