The Reverend Kermit B. Morrison

The Reverend Kermit B. Morrison 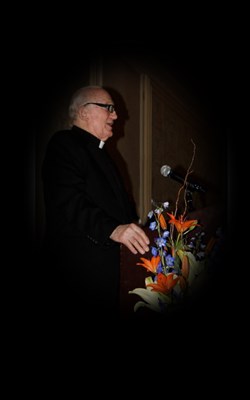 Let us remember the Reverend Kermit B. Morrison, who died at the Mary Wade Home in New Haven, CT on January 2, 2015 at the age of 86. Rev. Morrison served The United Methodist Church for more than half a century; the majority of that time was served in the NY Conference.

Kermit Blancher Morrison was born on Jan 17, 1928, in St. Johnsbury, VT. He was raised in Springfield, VT in a large and loving family that included three sisters, a brother and grandparents. He was a fine student and a star athlete.

He attended DePauw University in Greencastle, IN, where he majored in philosophy, lettered in football and was a member of Beta Theta Pi fraternity. He graduated in 1951 with a Bachelor of Arts degree, and was also the recipient of the Walker Cup, presented annually to the member of the senior class who had contributed the most to the University community during his or her four years on campus. He then attended Yale University Divinity School, earning his Bachelor of Divinity in 1955; he returned to Yale and earned his Master of Sacred Theology in 1970.

Kerm was always an active leader and his ministry extended beyond the church, leading groups of every age on bicycle trips, skiing trips, cruises, and excursions to places such as the Passion Play in Oberammergau, Germany. He directed plays, coached sports teams and led choirs, Sunday Schools and summer church camps.

Kerm was a longtime supporter of the Mary Wade Home in New Haven, CT, acting as chaplain and serving as a member of the Board of Managers. In 2007, as Alzheimer’s disease began to affect him, he and his wife, Mary Ellen (Susi), moved into an apartment owned by Mary Wade; following Susi’s death in 2011 Kerm moved to Mary Wade’s skilled nursing unit, where he died, peacefully, supported by the love of family, friends and caring staff.
During Kerm’s first marriage, to Marilyn Payne, they adopted two children, Michael (who died in 2005) and Marci. Kerm married Susi in 1964, and helped to raise her four children, Thomas, Robert, Ellen and James. Kerm is survived by five children and six grandchildren, a sister, Barbara Ann Streator, a brother-in-law, Sheldon Stokes, and many nieces and nephews. His faith, kindness and energy live on in the memories of all his family and thousands of parishioners whose lives he touched over the more than five decades of his ministry.

A celebration of Kerm’s life will be held Saturday, January 24th, at 2pm at The Mary Wade Home, 118 Clinton Ave, New Haven, CT. For more information, contact Peggy Nelson at 203-888-5625, and confirm your attendance by January 15th. To honor Kerm’s memory, in lieu of flowers, the family requests that donations be made to The Mary Wade Home, 118 Clinton Avenue, New Haven, CT 06513.