The Reverend Keith A. Muhleman

The Reverend Keith A. Muhleman 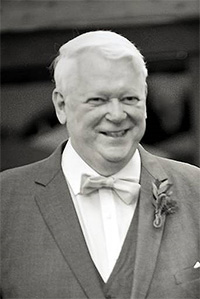 Let us remember with thanksgiving the life and ministry of the Reverend Dr. Keith Allen Muhleman who died at the age of 67 on January 8, 2015. Keith is survived by his mother, Nelda A. Muhleman of Barefoot Bay, FL, wife, Judy A. Muhleman of Newburgh, NY, daughter Heidi M. Mackey and son-in-law Michael J. Mackey of Forest Hills, NY, and daughter Heather E. Jenkins and son-in-law Bret D. Jenkins of Forest Hills, NY, as well as one sister and two brothers. Keith is also survived by three grandchildren, Erin M. Mackey, Phoebe C. Jenkins, and Reid M. Jenkins. He is preceded in death by his father Donald S. Muhleman of Wheeling, WV.

Keith was born on March 12, 1947 in Martins Ferry, Ohio and spent the majority of his childhood in Wheeling, West Virginia. He met the love of his life, Judy, while attending West Virginia Wesleyan College in 1965. They married in August of 1969 in Vienna, WV. He then graduated with a Doctorate of Ministry from Claremont School of Theology in Claremont, CA in 1980.

After moving to Charleston, West Virginia, Keith began working for The United Methodist Church as a local church pastor. Over the next ten years, the couple welcomed two children and Keith continued his work with the church by expanding technology and communication efforts as the Director of Communications Ministry in the Wisconsin Conference in Madison, WI, and then as National Director of Television and Telecommunications at United Methodist Communications in Nashville, TN. Keith then served as the Associate General Secretary for Mission Education and Cultivation at the Board of Global Ministries in New York, NY. This is also where Keith developed his passion for fundraising. Keith continued on as a certified fundraiser and a member of the National Society of Fund Raising Executives. He honed his craft at the Diocese of the Armenian Church, the Peale Center for Christian Living and the Cancer Research and Treatment Fund in New York City, and most recently held the position of President and Executive Director of the United Methodist Frontier Foundation from 2008 to 2014. With the Foundation, Keith raised millions for the continuation of the church through stewardship.

Keith’s true passion was his family – wife, Judy and daughters Heidi and Heather. Believing family was more than just those born into heritage, Keith touched so many lives as a father figure, brother, counselor, friend and teacher to thousands throughout the years. Keith will continue to teach as he has donated his body to Weill Cornell Medical College for research and scientific study related to pancreatic cancer.

Ross Williams, New York Conference Director of Administrative Services, said, “Keith has served the Conference and our churches faithfully for many, many years through the mission and ministry of the Frontier Foundation. His friendly nature, dedication and enthusiasm will be sorely missed by all.”