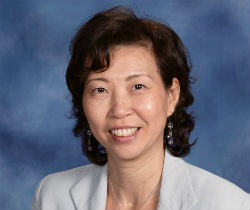 Let us remember with thanksgiving the life and ministry of the Reverend Rachel C. Ye Kim, who by the grace of God entered that kingdom which has no end on January 14, 2015.

Rachel entered the world in Inchon, South Korea on March 25, 1964; she was the daughter of Dong Sup Ye and Hae Soon Ye.  “As part of an immigrant family, her two younger siblings also witnessed that she was very much a “second parent” while their parents forged a family and livelihood in this new land, America,” stated Rev. Brian Bodt. According to Rev. Charlie Yun, “They originally attended the Korean UMC in Elmhurst, Queens, but later when the church moved to Hempstead, they followed to the new location. Rachel attended Hofstra University and later Drew University School of Theology.”

She was married to the Reverend Gye Ho Kim (Tom) on January 20, 1998. They are the parents of two children, Jonathan age 14 and Elizabeth age 12.  Pastor Kim is appointed to New Haven: First & Summerfield.

A Service of Death and Resurrection was held on January 17, 2015 at the Mary Taylor Memorial UMC, Milford, CT. The Reverends Kun Sam Cho, Bishop Jane Allen Middleton and Superintendent Kenneth Kieffer participated. Clergy of the conference were invited to vest, process and sit together. A service of committal followed the church service at King’s Highway Cemetery, Milford. Following the services all were invited to the church to greet the family and share refreshments.

The quality of Rev. Rachel Kim’s life is not measured in years, but in roles she played with faithfulness as daughter, sibling, wife, mother, pastor and friend.  With confidence, it may be said that John Wesley’s dying words echoed on the occasion of Rachel’s death, “The best of all is, God is with us!”