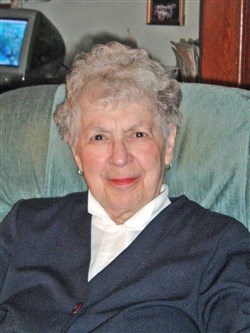 Let us remember the Reverend Madeline L. McDonald a retired Elder of the New York Conference who left this world for the one where the Sun never sets. Madeline was born February 23, 1929 in Long Island City, NY, living past her 84th birthday, dying after a short illness on November 7, 2013.

She earned a B.A. degree in psychology and education from Adelphi University and a masters of divinity in practical theology from Union Theological Seminary. Prior to her ordination, Madeline was employed as a teacher in early intervention at United Cerebral Palsy.

The highlights of Rev. McDonald’s journey in ministry included ordination as Deacon and a Probationary Member of the New York Conference in 1978. In 1983 she received Elder’s Orders and became a Full Member of the N.Y. Conference. Her official retirement was on July 1, 1991, with 12 effective years of service.

Rev. McDonald’s appointment history began in 1978 at Center Moriches, two years later she took a sabbatical leave. The next appointment was to Highland Falls and Fort Montgomery from 1981-1985, moving on to Grace Church in Valley Stream as an associate pastor. Three years later, she became the “coordinator” of the Upper Catskills Larger Parish, appointed with two additional pastors she served Andes, Pleasant Valley, Margaretville, Halcottsville, Roxbury, Fleischmanns and Halcott Center, until 1991.

Following her retirement, the McDonalds moved to Whitesboro where she served churches in the Upper New York Conference for over two decades. Her first appointment upstate was as interim pastor at Taberg, Lee and Maynard churches. In 1994 she began to serve as the Local Church Consultant for the Mohawk District. The work that was closest to her heart was the Prison Ministry at Walsh Medical Center and her involvement with New Yorkers for Alternatives to the Death Penalty.

Madeline married Russell McDonald in June 1949 until his death August 2011. They are the parents of four daughters, Susan Montrose, Deborah Frank, Laura McDonald and Karen McDonald, and eight grandchildren.

A memorial service is planned for this Thursday, November 14 at 4:00 pm at the Clinton United Methodist Church, 105 Utica Road, Clinton, NY. Rev. Jeff Hale, pastor, and Rev. Myra Kazanjian will lead the service.