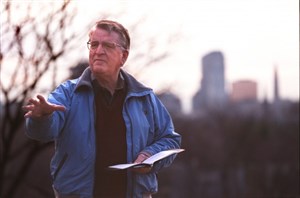 Let us remember the Rev. Roger Floyd who died on August 2, 2013 at 82 years-of-age. A native of Connecticut — Naugatuck was his hometown — his entire life and ministry was spent in “The Constitution State.” Near the end of his pilgrimage, Roger and Joy Floyd made their home at the Seabury Retirement Community in Bloomfield for the last six years.

His first response to God’s call to ministry was when Roger became a local preacher in 1955 in the former New York East Conference of The Methodist Church. The following year he was ordained a deacon and entered probationary membership. The year after that he received his first pastoral appointment to New Haven: Westville. In that period he received elder’s orders and became a full member of the conference. His appointments continued in several of Connecticut’s cities: Waterbury: Grace & St. Paul’s (’64) and the Inner City Ministry of the Waterbury Council of Churches (’65).

His commitment to Christ’s prayer for Christian unity brought Rev. Floyd to two executive director positions: Greater Bridgeport Council of Churches (’71); he did not have a problem “mixing religion and politics,” twice he attempted to defeat the incumbent mayor of Bridgeport. The other urban executive position was to the Capitol Region Conference of Churches in Hartford (’82); that was his last appointment as he retired in 2000. According to his family, he was the host of a monthly talk show on Channel 3, and for 16 years he had a weekly radio show.

His ministry reflected the Wesleyan spirit by assisting victims of economic and racial injustice. He was opposed to bringing casino gambling to Hartford. In an op-ed piece for The Hartford Courant he addressed the subject of poverty,

So people who are able to pay a reasonable rent are unable to find a furnished room to live in. Why? Because the poor and the near poor are on no one’s concern list, much less their priority list….Hartford’s leaders must shift into high gear and develop units for single-room occupancy….The quality of a community still should be measured by the level of its concern for the poor.

According to the obituary, Rev. Floyd “traveled to India and Nicaragua, produced a video on The History of Racism in America, organized countless workshops on casino gambling, the Gulf War, poverty and affluence, and, understanding the Christian right.”

Christian ministry in the lifetime of Roger Floyd did not end with retirement. He served as a trustee of the Hartford UMC, served on the Executive Council of CT AARP, served on the Board of Directors of the Hartford Chapter of the United Nations, self-published three books, and continued to create and lead workshops at Seabury.

A memorial service is scheduled to be held at the United Methodist Church of Hartford, 571 Farmington Avenue, Hartford, CT, on September 8 at 4 p.m.

(Courantblogs.com by Bernie Davidow is credited for much of the content in this article; photo by The Courant)