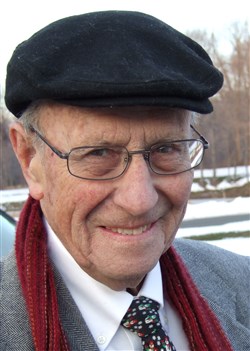 William W. Ross entered this life on January 10, 1922 in Orange City, Iowa. He graduated from two Iowa colleges, Northwestern Junior and Cornell. His academic education for ordained ministry was at Boston University School of Theology. During a student pastorate in Townsend, MA, he married Jean MacDonald in 1944. They were the parents of three sons, William Howard, Robert Ellis and David Allen. His marriage to Jean ended and, after several years, he and Ella Betsy Case were married in 1964. Bill and Betsy had three children, James W., Leola Betsy and Varick Thomas. Bill experienced the death of his son Robert and his beloved wife Ella Betsy. She was named during the recent Memorial Service of the New York Annual Conference on June 5, 2013.

Bill entered that life which has no end on June 16, 2013, Father’s Day, at 91 years-of-age. His beloved daughter, Leola wrote, “His grief, the physical anguish and the mental distress of his illness with dementia are now gone and he is at peace.” A memorial service will be held at the Plainville United Methodist Church, 56 Red Stone Hill, Plainville, CT, on Saturday, June 29, 2013 at 11 a.m. A reception will follow at the Congregational Church of Plainville.

Memorial donations may be presented to the Plainville Church, Enfield Congregational Church, or any Masonic charity.