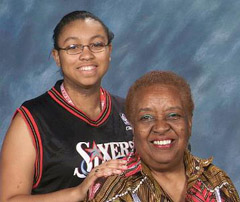 Let us remember with thanksgiving the Rev. Dolores Helena Johnson Henderson who died on May 17, 2013 at 77 years of age. Services were held at the St. James United Methodist Church, St. James, NY on May 25, 2013. The committal service took place on May 28 at the Heavenly Rest Memorial Park in East Hanover, NJ. Rev. Henderson experienced the death of her daughter, Mary Watkins, but found healing as caregiver for her granddaughter, Mara Helena Rani Watkins. Other survivors include a devoted niece, Viola Johnson, and a host of nieces, nephews, cousins, other relatives, church family and friends.

Simply known as “Dolores” throughout the New York Conference family, her smile and demeanor reflected the presence of the Powerful Healer who brought her through some difficult days, empowering her for pastoral ministry.

Rev. Henderson’s ministry as a United Methodist pastor began in 1990 when she was received by the New York Conference as a Deacon on Probation. In 1991 she received her first appointment to Bronx: Trinity (City Island), during her years of service there she received Elder’s orders and full membership in our annual conference (1993). The following year Dolores was appointed to Freeport: English and three years later she began serving as the superintendent of the Metropolitan South District. Mt. Vernon: First was her final appointment (2004-2006) prior to retirement in 2006. As a retired elder she was appointed to Freeport (2006-2009) followed by service to her present appointment at St. James, NY: St. James (2009-2013).

Our lives and ministries have been blessed by the lively presence of a wonderful pastor we know as “Dolores.”