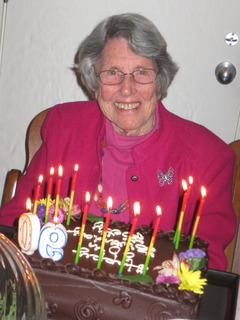 Let us remember with thanksgiving the life and witness of Elizabeth Keeney Hill. She was the daughter of William Keeney and Kathryn Echard Keeney, parents of one son and five daughters. A longtime peace activist, Betty died on Martin Luther King Day, January 19, 2015, at the age of 94.

A coal miner's daughter, she was believed to be one of the first girls from her area in western PA to go to college, at Bluffton University in Ohio. Her family received help from Quaker and Mennonite missionaries in the coal mining region, and she served as a missionary with Mennonites in Paraguay from 1945 to 1947. On her return, a young ice cream advertising man having lunch at a café in Uniontown, PA, saw her picture in the local newspaper and told his waitress, "I'm going to marry that girl." Indeed, he wooed her and won her, and they married three months later on June 21, 1947. Her faith and drive to serve inspired him to become a Methodist pastor. Rev. George G. Hill and Betty together campaigned for civil rights, peace and social justice until his death in 1988. Betty continued, and traveled to Nicaragua, Cuba, Israel and Vietnam, among other places, in her passionate, faith-based advocacy of peace, fairness and friendship.

Betty taught at several public schools, including in Hartford and Norwalk, CT. She and George - and then she alone - treasured summers at their "little red cottage" in Alstead, NH, finding fellowship and good contra dancing in the community there. Even in her last years, when she lived with Alzheimer's, her goodness, wit, and love of dance sparkled through. She is survived by three children - Gary (Kathy Tiddens) of New York City; Kay (Mitchell Morse, d.), of Hamden; and Steve (Elizabeth) of Avon, plus four grandchildren and five great-grandchildren.

A private burial service was held in the Grove Street Cemetery, New Haven, on January 25, 2015. Donations in honor of Elizabeth Keeney Hill can be made to the annual Keeney Peace Lecture at www.bluffton.edu/giving, or to the New Haven Leon Sister City Project at www.newhavenleon.org.