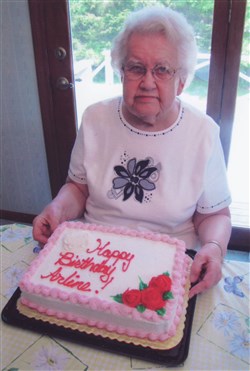 Let us remember with thanksgiving the life and service of Ms. Arline Priscilla Johnson, widow of the Reverend Courtney Johnson (d. 1972). She died on February 13, 2015, at 90 years-of-age. Born on May 13, 1924 in Brockton, MA, Arline graduated with a B.S. from the University of Chicago. At age 56 she earned an M.S. from St. Joseph’s College (West Hartford) and taught at Westbrook High School from 1966 to 1989, and in 1987 was named the Connecticut Home Economics Teacher of the Year. In her retirement, Arline was employed as a mentor to starting teachers by the Connecticut Department of Education and volunteered as an English-language tutor for eight years with Literacy Volunteers in Westbrook.

Ms. Johnson was a long-time and devoted member of the Clinton United Methodist Church. Her pastor, the Reverend Craig Fitzsimmons celebrates her roles as an active member of the choir, a member of the Clever Crafters that makes items for nursing home residents and church fairs, and a participant in Bible study groups and mission projects. Arline introduced the Swedish Festival of St. Lucia to the Clinton church, an annual celebration that is observed in early December.

Arline Priscilla (Hanson) Johnson is described as, “a committed Christian woman, giving of herself to support others throughout her entire life. She will be remembered warmly and missed by her family, her church, her neighbors, and her former students and teaching colleagues.”

A memorial service will be held at the Clinton church on March 14, 2015 at 1:00 pm., the Rev. Fitzsimmons officiating. Memorial contributions may be made in Arline Johnson’s name to the Clinton UMC, 12 Commerce Street, Clinton, CT 06413.