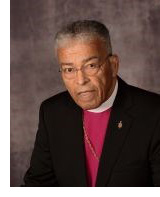 Let us remember with thanksgiving the life and ministry of Bishop F. Herbert Skeete, a retired bishop of The United Methodist Church, who passed away at noon on February 11, 2021.

Below is the press release from the Council of Bishops. We know that many in the New York Conference have wonderful memories and stories of how and when Bishop Skeete touched your lives! Let us share these stories with one another.

In 2002, Herb was reactivated by the Council to serve as Interim Bishop in Zimbabwe for a year.
“Bishop Skeet’s death leaves a void in the Council of Bishops and in our hearts. Even in retirement Bishop Skeete brought his passion for justice to the COB, a passion that had guided his entire ministry. His strong voice and steady leadership were gifts to The United Methodist Church. He leaves a great legacy of love for neighbor,” said Bishop Cynthia Fierro Harvey, president of the Council of Bishops.

Colleagues from “the NEJ College of Bishops extend their deepest sympathies to the family of Bishop F. Herbert Skeete.  He was a treasure among us, advocating for justice always, serving as a patient mentor and providing visionary leadership.  His legacy continues on in the lives and ministries of the areas he served,” said Bishop Peggy A. Johnson, president of the NEJ College of Bishops

Bishop Skeete was born in the Harlem section of New York City. His childhood was spent in Barbados, West Indies, through high school. Following four years in the U.S. Air Force, he attended Brooklyn College and he would later receive a bachelor’s degree from Drew University.  He served South Ozone Park Church of the New York Conference as he worked on his Master of Divinity degree at Drew University Theological School.

He was ordained deacon and elder by Bishop Lloyd C. Wicke. Later, he earned a Master of Sacred Theology degree from New York Theological Seminary and a Doctor of Ministry from Drew. He also took graduate work in social psychology at the New School for Social Research in New York City. He received honorary degrees from Philander Smith College in 1983, Jewish Theological Seminary of America in 1986, Eastern Baptist Theological Seminary in 1986 and Africa University in 1996.

He served as a trustee of Union Theological Seminary, New York; Drew University; and The American Bible Society. He was a member of the Board of Trustees of Boston University, Gammon Theological Seminary and Africa University, Zimbabwe. He had been a popular religious radio commentator in New York City and moderated a monthly television program in Philadelphia. He enjoyed carpentry, bicycling, camping, sports, reading and travel.

He is survived by his wife, Shirley Clarissa, two sons, Mark and wife Terri, and Michael and wife Linda, and three grandchildren, Matthew, Ajani, and Andrew. He is also survived by a sister, Pearl Cumberbatch, in addition to a host of nieces and nephews.