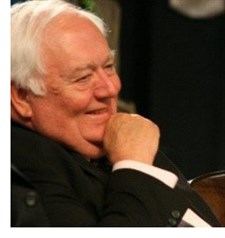 His early years were spent enjoying family, hunting and fishing with his father, playing the violin (when his parents learned he had perfect pitch they provided lessons for him), going to Saturday night races at the Tulsa state fairgrounds track and, as an only child, making many friends, a skill he never lost.

He attended school in Tulsa, then moved with his family to Phoenix and graduated from Milburn High School in New Jersey. He returned to Oklahoma State University from which he graduated in 1963. He holds a Master’s degree as well from St. Louis University (1965).

He met Jane Stewart Allen Middleton, he claims, when he saw her riding on the back of a convertible campaigning for Freshman Class secretary at Oklahoma State University. As he tells it, he decided at that moment that he would marry her. They married October 15, 1961 in Overland Park, KS, a marriage which lasted for 60 years, two months, and one week. She was never allowed to toss out the dress she was wearing the day he first saw her.

In 1969 Jane and Jack moved from Norman, OK, where Jack was employed by the University of Oklahoma, to Connecticut expecting this to be a short term stay in the east. It was not. They stayed for 50 years. He was employed by the Office of Urban Affairs of the Archdiocese of Hartford, and later by the Asylum Hill Neighborhood Organization, doing urban planning and organizing for poverty relief and for justice. He also worked for Junior Achievement, for Economics America, and for the University of Hartford in development.

They joined St. Luke Methodist Church, Oklahoma City, in 1963. Later when Jane received her call, attended seminary and was ordained in The United Methodist Church, he willingly and with loving support followed her in serving pastoral appointments in Connecticut and New York and as a bishop in the Susquehanna Conference in Pennsylvania and the New York Conference (interim). It was a plus for him that the Pennsylvania assignment was located in the middle of many, many opportunities to enjoy his car hobby.

He was an active lay person, participating in almost a dozen volunteer in mission teams in Cochabamba, Bolivia. He served the New York Conference spearheading a fund raising project for Africa University endowed scholarships and creating a plan to fully fund pastors’ pensions.

Jack’s passions were his family, his faith, his cars and all things cars, issues of justice, his friends, and current events. He was a member of the Automobile Historical Society and the Madison Avenue Sports Car Racing and Chowder Society. His extensive collection of automobilia, books, whole runs of magazines, and cars was sold at auction in 2019.

He adored his family, his children and grandchildren, the family he married into and his many cousins. He is survived by his wife, Bishop Jane Allen Middleton; his daughters, Mari Jane Middleton (Michael Marion) and Laura Rachelle Middleton (Ronald Whitman); his grandchildren Anthony Jackson Middleton (Sonni Pinnelos), Ethan Middleton Whitman, and Louise Mae Whitman; and his sisters-in-law, Marcia Allen Johnston and Susan Allen Slattery (Jeffery), and brother-in-law, Bob Allen (Cathy), as well as many cousins. He was predeceased by his father, Jack Middleton, and mother, Ruth Marie Reynolds Middleton, and by his granddaughter Alexis Jane Marion.

In the fall of 2019 Jack and Jane moved into a Continuing Care Retirement Community, John Knox Village, in Pompano Beach, Florida. Condolences may be sent to: 536 Village Drive, Pompano Beach FL 33060; or to bishop.jane.middleton@gmail.com.

A virtual service will be held to celebrate Jack's life and will be available for all to access.

Memorial contributions may be made to a cause of the donor’s choice or to the Encounter with Christ in Latin America & the Caribbean Fund. This is an endowed fund which has already been used to provide over $1 million in resources for ministry. It is held and administered by the General Board of Global Ministries. The family has supported this ministry and hopes you will too. Contributions may be made online or mailed to Dr. Cynthia Weems, South East District Office, 536 Coral Way, Coral Gables, FL 33134. Checks should be made payable to the Florida Annual Conference, with “Encounter with Christ Permanent Fund 025100” in the memo field.