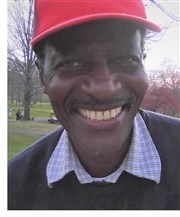 Let us remember with thanksgiving the life and ministry of James Z. Gadzini, 75, who died on Thursday, December 30, 2021. James is the husband of Rev. Penny Gadzini, pastor at St. James UMC in Lynbrook, NY.

James Zithulele, or "Thuli", born on August 28, 1946, is the child of George Selikane of Botswana and Snombina Vera Ncapai of South Africa, the daughter of a Methodist minister. He had pleasant childhood memories of life with family on a farm near the ocean, and he especially loved the peaches. When the family was moved to Soweto, he, like the other boys, made toy cars from wire they found on the street. A great facility with languages served him well as the children spoke many languages. Soon, soccer became his passion. He was gifted, played like a dancer, was nicknamed "the Professor" and became semiprofessional. When a broken leg ended his career he taught himself the guitar and joined a band, "The All Arounders." They became one of the popular bands in South Africa. The traveling and lifestyle took its toll and James left the band to become an artist. He married and supported his young family as an artist. When offered a scholarship to study art in Belgium, he turned it down, having other plans.

James joined the ANC, the African National Congress, and left home to join the struggle against Apartheid. His mission was to get an education and return home to teach black South African children math, science and technology. The vision was to raise up a new generation of leaders for a post-Apartheid South Africa. His mission was long delayed as he lived in refugee camps in Tanzania and Algeria and tried to get into the United States. During this time he and his wife divorced. Finally, he arrived in New York in the early 1980's. Difficulties abounded and getting his education seemed to elude him. However, James was able to get a room at Union Theological Seminary, in McGiffert Hall where Penny Van Riper lived as a student.

During Lent in 1985 James and Penny were introduced by Stanley at the mailboxes. Soon, they were taking long walks in Riverside Park. Friendship deepened and they were married at the First United Methodist Church of Jamaica on August 23, 1986. Soon after James began his studies at City College. Together they were engaged in the struggle against Apartheid and served St John's UMC in North Valley Stream, as well as Maspeth UMC and Good Shepherd UMC, both in Queens. They were blessed by the birth of their son, Jonathan Sakhile. Upon graduation James began teaching at Oliver Wendell Holmes Middle School in Harlem, remaining faithful to his mission of teaching underprivileged children, albeit in an unplanned geography. A highpoint of his career was building suspension bridges with his students.

Upon James' retirement from teaching, the Gadzini family moved to Suffern, NY in Rockland County. James became the caretaker at Christ Episcopal Church and Penny became a member of the staff at Creative Living Counseling Center. Upon returning to Penny's native Long Island, James sang in the Grace UMC choir in Lindenhurst and volunteered at the Nourish Babylon feeding program at Christ Church in Babylon.

James was an athlete, a musician, an artist and an educator. He loved all things beautiful, especially wood furniture, which he enjoyed refinishing. He was never happier than when he was on the golf course or dancing with Penny. James's smile lit up the world and endeared him to all who met him. He was deeply loved and will be deeply missed.

James was predeceased by his parents and his son Vuysile. He is survived by his wife, Penny; his son Jonathan; his daughter, Lorraine Rijntjes; his grandchildren, Yolanda and Euclidia; and his sisters, brothers, nieces and nephews. In lieu of flowers, donations may be made to Compassion International.

Visitation will be on Wednesday, January 5, 2022 from 4:00pm to 7:00pm at St. James United Methodist Church, 11 St. James Place, Lynbrook, NY 11563.  A memorial service will take place on Thursday, January 6, 2022 at 11:00am at the same location. Given the recent COVID surge we strongly encourage friends to attend Thursday’s memorial service by Zoom.