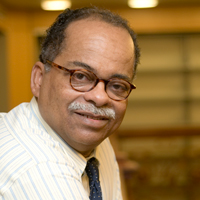 Let us offer prayers of condolence and comfort to Rev. Dr. Traci C. West. Traci’s husband, Professor Jerry Gafio Watts, died on November 17, 2015. Watts was a professor of English at the City University of New York Graduate Center and a leading scholar of African-American literature, culture and political thought.

Jerry G. Watts, 62, was born May 17, 1953 and raised in Washington, DC. He was the son of the late Maria and James S. Watts Sr. Mr. Watts graduated from DeMatha Catholic High School (DC), earned his BA from Harvard University, and a PhD from Yale University.

Mr. Watts was known for his commitment to mentoring his students, generous spirit to workers across class and race/ethnicity, critiques of white supremacy in U.S. racial politics and academia, scandalous humor and storytelling, and love for his family.

Professor Watts, in addition to being survived by his spouse, Traci West, leaves behind his sister, Brenda Watts; brother, Robert Watts; nephews James Watts III, Gregory Watts, Michael Watts, Shawn Sloan, Kyle Sloan; niece, Ravae Perkins; aunt, Evelyn Foster, and a host of relatives, students and friends. He will be greatly missed by all who loved him and had the chance to learn from him.

A memorial service will be held Dec. 5, 2015, at 6:15pm at the New York Society for Ethical Culture, 2 W 64th St., New York, NY. A reception will follow. Everyone is invited to this time of storytelling and celebration of the life of Professor Jerry Gafio Watts.

For more information or to send a condolence, visit https://www.bradleyfuneralhomes.com/tribute/jerry-watts-november-16-2015.html. In lieu of flowers, donations in honor of Jerry Watts may be made to NAACP Legal Defense Fund, 40 Rector St., 5th floor, New York, NY 10006.