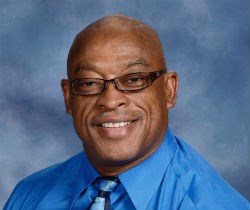 Let us remember with thanksgiving the life and ministry of Robert James Dorsey, who died on February 3, 2017 at Vassar Brothers Medical Center, Poughkeepsie, NY due to cardiac arrest. Robert was the husband of Pastor Scharlise Dorsey, who is appointed to the Wappingers Falls United Methodist Church. He was a retired bus driver for Liberty Lines Transit after 28 years of service.

Robert was born on Friday, December 5, 1952 in the Bronx, NY to James and Lillian Dorsey. He was a man who faced challenges head on and knew the power of prayer. His father passed when he was very young, and shortly afterwards his mother had a stroke, leaving Robert to be the man of the house at the age of 14. In June 2016 he was diagnosed with stage IV cancer. Robert spoke of being a “modern-day miracle;” he fought and defeated cancer. Two weeks prior to his passing, an MRI revealed no evidence of cancer in the brain.

Robert was a man of his word and a man of integrity. He was loved by many and always willing to help others. Robert will always be remembered as a provider, protector and a man that took care of his family. Robert was a disciple for Christ. His trust and faith in Jesus as Lord and Savior was clear in his everyday walk. He will be deeply missed by his family and friends.

In addition to his wife, he is survived by his sister, Deborah Dorsey; four daughters, Arrettres Hollands and her husband, John, Ebony McFarlane and her husband, Omeal, Daniella Dorsey and Jaylene Dorsey; four sons, Robert D. Dorsey, Isaiah James Dorsey, Ta’Shawn Dorsey and Joseph Dorsey; step-son Prince Combs and step-daughter Princess Lamb and her husband, Jerrick; and close cousin Allen Ray. He is also survived by ten grandchildren and many nieces, nephews and cousins. He was preceded in death by his parents, James and Lillian, and by his sister Barbara Dorsey-Coan.

Friends may call at the Wappingers Falls United Methodist Church, 9 South Mesier Avenue, Wappingers Falls, NY on Saturday, February 11, 2017 from 1:00pm to 3:00pm.  Funeral services will be held following the visitation at 3:00pm with Rev. Dr. William Smartt officiating. Burial will be private at the family’s request.