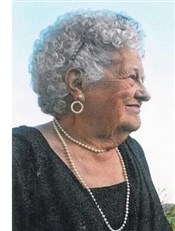 Let us remember the life and ministry of Adelia Riley of Jackson Center, OH, who died on Sunday, September 24, 2017 at Lane Park of Sidney senior living community. Adelia was 91.

She was the widow of Rev. Roger D. Riley, who served in the New York Conference from 1954 until his retirement in 1984. He pastored several parishes that included numerous churches in what is now the Catskill Hudson District, including Jefferson circuit; Windham, Ashland and North Settlement circuit; Rockland Area Ministry; Franklin UMC, and Kenoza Lake Parish. Rev. Riley died in February 2009.

Adelia was a member of the Jackson Center UMC and the United Methodist Women. Being a preacher's wife, Adelia played an important role in all of Roger's churches. She oversaw cooking the board dinners, with barbecue chicken as one of her specialties. At Ashland UMC she was a big part of designing and rebuilding the church after it was destroyed by fire. Adelia was a collector, and loved to travel, go camping, cook, sew and crochet. Her children referred to Adelia as “the early audiobook" because she would read to them during their family trips. All who loved her will miss her.

Pastor Rob Ulmer officiated a memorial service on Thursday, Sept. 28, 2017, at the Jackson Center United Methodist Church. Burial will take place at the convenience of the family in Seventh Day Cemetery in Jackson Center.