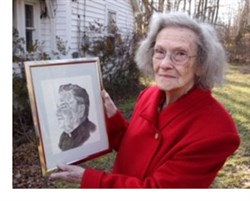 Let us remember the life and ministry of B. Elizabeth Cady, 99, of Olivebridge, NY, who passed away peacefully at her home on Thursday, February 7, 2019. Born June 17, 1919 in Brooklyn, she was the daughter of the late Chester Arthur and Mabel Stewart Snyder.

Elizabeth was the widow of Rev. Merton S. Cady who predeceased her on December 11, 1975. Rev. Cady served the New York Conference for more than 35 years, pastoring the following churches in the Catskill Hudson area: West Fulton, Blenheim, and Fairland; Harpersfield and North Harpersfield; Olivebridge, Samsonville and The Vly; Kenoza Lake, Jeffersonville, Fosterdale and Cochecton Center; Coeyman’s Hollow, Dormansville and Lambs Corners; Hensonville, Maplecrest, East Jewett and Eastkill Valley. After his retirement in 1972 he also served Andes, Pleasant Valley, and Rifton, all in New York.