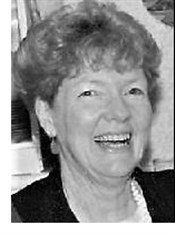 Let us remember with thanksgiving the life and ministry of Edith Grace Trueman, 93, of Warwick, NY who died on Tuesday, April 27, 2021.

Born in Brooklyn, NY on May 13, 1927 and known as Grace, she was the daughter of John Tolar Reiners and Edith Grace Wheeler. She attended public school and graduated from James Madison High School, Brooklyn, NY. She attended Mills College of Education, an affiliate of Adelphi University, from which she received her bachelor's degree in early childhood education.

Grace was the widow of Rev. Duncan T. Trueman. Rev. Trueman served in the NYAC from 1955 until his retirement in 1989. He pastored Goshen UMC and New Milford & Edenville UMCs in NY, as well as serving in several extension ministry appointments in the Warwick, NY area. In his retirement he continued to serve New Milford & Edenville from 1989 to 2005. Rev. Trueman died in 2010.

From an early age, Grace aspired to be a teacher. She taught preschool in Bayside and Flushing, NY until moving to Bethpage, NY where she taught and became the director of the Levittown Nursery Cooperative School. In 1948 Grace married Duncan Trueman and in 1955, when Duncan entered the Methodist ministry, she relocated again. Appointed to churches in rural Sullivan County, NY, theirs became a partnership in ministry. During the tenure of his ministry, she taught in Livingston Manor, NY. Moving once again to Goshen, NY, she taught kindergarten there for 25 years. Grace taught a total of 30 years doing what she loved. Whether it was in the classroom, the church community or the family, every experience was special.

Not only a teacher and a pastor's wife, Grace was also a leader. Active in many organizations and groups relating to children, she was the vice-president of the National Organization of Migrant Children; a consultant for Head Start programs throughout the state; and president of the Association for the Education of Young Children. She conducted many workshops and was a voice for children throughout the area.

In later years, she was Aunt Grace, Grandma Grace, and Mother Grace to many nieces and nephews and to a host of young people. She is survived by her daughter, Anna Trueman of Marin County, CA; her son, Steven, and his wife, Joy, of Las Vegas, NV; her brother, Rev. Robert Reiners and his wife, Elizabeth; and many nieces and nephews. She was predeceased by her husband, Rev. Duncan Trueman; her brother, John Tolar Reiners, Jr.; and her sisters-in-law, Margaret Reiners and Harriette Hart.