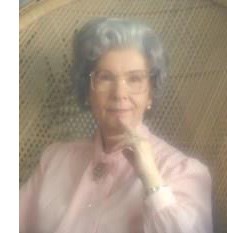 Let us remember the life and ministry of Faith Natalie Wynne, who died on Tuesday, January 23, 2018 at home surrounded by her children. She was the widow of Rev. Gene F. Black of the New York Conference, the mother of Rev. Betsy Ott, New York-Connecticut District Superintendent, and the grandmother of Rev. Gene Ott, pastor of Yorktown UMC.

Faith married Gene F. Black, a United Methodist pastor, on August 6, 1944. Rev. Black served churches in what is now the Catskill Hudson District of the New York Conference and the Oneonta District of the Upper New York Conference: Hensonville, Maplecrest and East Jewett, South and North Highland, Summit, Charlotteville, South Worchester, Delhi, Coxsackie and Earlton, and Franklin. Faith and Gene had two children together, and he predeceased her on November 19, 1970.

After Rev. Black's death she worked for Delaware County Social Services as a protective case worker and later was employed by The Hospital in Sidney, NY as a social worker. On October 8, 1977 she married Alfred C. Wynne of Ridgewood, NJ. She lived in New Jersey and Manhattan until Alfred’s death in June 1981, when she returned to her home in Franklin and cared for her father until his death in 1988.

Faith was a life-long United Methodist who in recent years attended the Aldrich Baptist Church. She was an avid reader who belonged to the Onesiphorai reading club for fifty years, and she enjoyed travel, cooking, baking (especially pie and chocolate chip cookies) and knitting. She played the piano and accompanied her first husband, her daughter and a number of children’s choirs in the churches she attended over the years.

Faith is survived by her children, Gregory Francis Black and his wife, Frances, of Evansville, IN and Elizabeth Jane (Betsy) Ott and her husband, Gary, of Mahopac, NY. She is also survived by five grandchildren, Lisa Black Zaleski, Erin Black, Amy Black, Gene Ott and his wife, Erin, and Emily Galang and her husband, Marcel; as well as eight great-grandchildren, Noah and Delia Zaleski, Anya and Ella Black-Andrade, Isaac and Amelia Ott, and Josephina and MacArthur Galang. Faith is also survived by her sister, Gwendolyn Jones, of Oneonta, NY and her brother-in-law, Lauren Black, of Bloomington, IN, as well as a nephew, several nieces and their children and grandchildren.

The family requests no flowers. Memorial contributions may be made to the Franklin UMC (mailing address: PO Box 374, Oxford, NY 13830) or the Aldrich Baptist Church, RR 28, Franklin, NY 13775. Online condolences can be left at the Bennett Funeral Home website.