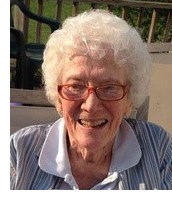 Let us remember the life and ministry of Gayle Romain Frailey Weyand, 94, who died peacefully on December 14, 2018 at Woodland Pond in New Paltz, NY. She was born on September 2, 1924 in Los Angeles, CA. Gayle was the widow of Rev. George F. Weyand, who died in 1978.

Gayle attended Southern Seminary in Buena Vista, VA on a piano scholarship and the Katherine Gibbs School in New York City. She worked as an executive secretary at various prestigious NYC firms, including Doyle, Dane and Bernbach. Gayle loved Manhattan, and frequented the opera, museums, and Broadway shows for as long as she possibly could, well into her late eighties.

She married Reverend George F. Weyand, pastor of Carmel Methodist Church in NY, on Dec. 27, 1958, and began her dedicated life as a pastor’s wife, always present and willing to serve. They went on to serve at Grace UMC in Newburgh, NY and Asbury-Crestwood UMC in Yonkers, NY, until George’s appointment as superintendent of the Hudson West District of the NY Conference, just a year before his death. After George’s death Gayle raised her two sons in Newburgh, NY, where she worked for the commercial lending department of what eventually became Bank of America. She was employed there for 20 years, until her retirement.

A loyal member of Grace UMC, she continued her unwavering and active Christian service. Her service did not end at the church. Gayle extended her work to the community, serving on the YWCA board and as an ardent volunteer for Habitat for Humanity. She was one of the inspirations for the Methodist Faith Build project at Habitat for Humanity of Greater Newburgh.

Gayle is survived by her sons, Mark Weyand of Newburgh, NY; and Peter Weyand and his wife, Karin Haaland, and their two daughters, Melia and Grace, of Kingston, NY. In addition to her husband, she was predeceased by her sister, Elaine Viebranz, of Larchmount, NY.

A memorial service and musical celebration of Gayle’s life will be held on Saturday, January 19, 2019, at 11:00 am at Grace UMC, 468 Broadway, Newburgh, NY 12550. In lieu of flowers, donations can be made to the Grace Church Memorial Fund (Grace UMC, PO Box 2556, Newburgh, NY 12550). Messages of condolence may be left at the Brooks Funeral Home website.