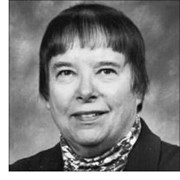 Let us remember with thanksgiving the life and ministry of Janet C. Johnson, 86, of Concord, MA, who died on Tuesday, September 14, 2021 at Emerson Hospital. Janet was born on September 28, 1934.

Janet was the loving wife of the late Rev. Dr. Lowell B. Johnson, who passed away in November 1999. Rev. Johnson became a member of the New York Conference in 1957. He served Mount Kisco UMC, Faith UMC on Staten Island, and Riverhead UMC in New York, as well as Seymour and Great Hill UMCs in Seymour, and Pleasant Valley and Washington Hill UMCs, all in Connecticut.

Janet is survived by four children: Cynthia and her husband, John Wortham, of Newton, MA; Randall and his wife, Nicole Banks, of Albuquerque, NM; Kent and his wife, Deborah, of East Greenbush, NY; and Lynn and her husband, Kevin Minney, of Alameda, CA. She is also survived by her grandchildren: Benjamin, Andrew, David, Chelsea, Ryan, Cody and Mabel, as well as by a sister and brother, and numerous relatives and friends.

Memorial services will be held at the Sudbury United Methodist Church and at Newbury Court at a time and date to be announced. Janet's body was willed to Harvard Medical School and her remains will eventually be interred in Riverside Cemetery in Pleasant Valley, CT.

In lieu of flowers, contributions may be made to Sudbury United Methodist Church, 251 Old Sudbury Rd, Sudbury, MA 01776 or New England Deaconess Association, 80 Deaconess Rd, Concord, MA 01742 or to the charity of one's choice. To share a memory or offer a condolence, visit: www.concordfuneral.com.