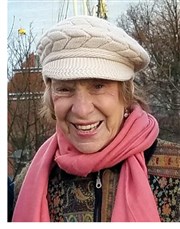 Let us remember with thanksgiving the life and ministry of Kathleen Elaine Hodges, 84, of New Bern, NC who died peacefully at home surrounded by her family on Monday, March 15, 2021. Kathleen was born on May 26, 1936 in Parkersburg, WV to Ralph Shirley and Mary Elizabeth Stephens.

Katie is survived by her husband of 63 years, Rev. A. Donald Hodges, who served in the New York Conference from 1960 until his retirement in 1996, at First UMC in Brewster, NY; Hyde Park UMC in NY; and Westport UMC in CT.

Katie was a wonderful wife, mother, and grandmother, known for her boundless love and energy. She earned a master’s degree in music from Columbia University, later completing a second master’s degree in education. Katie was an accomplished organist and pianist who often played for church services and special musical events and enjoyed performing with other musicians and in choral presentations, including performances at the Waldorf Astoria and Carnegie Hall in New York City. She also enjoyed playing bells in the Centenary UMC bell choir.

A teacher in New York State for 30 years, Katie was fascinated by the art of storytelling. She was awarded a variety of teaching grants, one of which brought her students to Lincoln Center for the Performing Arts in New York City. She was an active member of PEO International, a women’s educational sorority, and a beloved member of both Centenary UMC in New Bern, NC, and Wells UMC in Wells, VT. Katie and Don were very involved with the refugee community over the years - not only with their gifts and talents, but also through opening their home. Always generous with her resources, Katie contributed to many organizations and projects, including supporting young musicians in continuing their musical training. She was active in various political efforts, particularly those regarding social justice and human rights. Katie and Don enjoyed travel and summers at their lake home in Wells, VT.

In addition to her husband, Katie is survived by her three children: her daughter, Laurelyn Cropek of Champaign, IL; and her sons, Drew Hodges (Peter), of Portland, ME, and Brett Hodges (Claudia) of Basking Ridge, NJ. She is also survived by her grandson, Cameron Cropek, and her granddaughters, Evan Cropek, Ana Hodges, and Zoe Hodges. Surviving siblings include Pauline Rose Klein (Richard) of Yorktown Heights, NY and Ralph David Stephens (Patricia) of Belpre, OH. One brother, Robert Shirley Stephens (Naomi), is deceased.

The family thanks those involved in her care, particularly Dr. John Cho, his caring nurse, Jamee Potter, and Craven County Hospice. They also extend great thanks to their community of friends who helped in so many important ways.

A Celebration of Life Service is scheduled for Saturday, April 10, 2021 at 11:00 a.m., at Centenary UMC, 309 New Street, New Bern, NC 28560. Arrangements are in the care of Cotten Funeral Home, where online condolences can be made. Memorial donations may be made to Religious Community Services (RCS) in New Bern, NC.