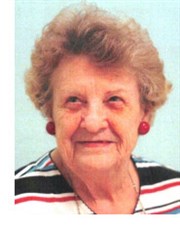 Let us remember with thanksgiving the life and ministry of Grace E. York, 105, who died on Tuesday, June 18, 2019 at her home in Hamden, CT. Grace was born in Columbus, OH on September 8, 1913. She was the daughter of Ervel & Minnie (Callahan) Benedict.

Grace was the widow of Rev. Lauren D. York, Sr., who served the New York Conference for 39 years. He pastored Bayville, Kings Park and Sea Cliff UMCs on Long Island, as well as Hamden UMC in CT and Saugerties, Centerville and Watertown UMCs in NY. He died in 1978. Grace was an organist for many of the churches where her husband was the pastor. Their son, L. David York, Jr., also served the New York Conference from 1965 until his retirement in 1997.

Grace resided for the last 20 years in Hamden, working along with her daughter at The Evergreen Shop. Grace was also an organist at local funeral homes whenever needed, and sang with the Greater New Haven Community Chorus for over 25 years.

She is survived by her daughter, Dorothy Althoff and her husband, Michael, of Hamden, CT; her son, Rev. Lauren "David" York, Jr. and his wife, Suzanne, of Monroe, CT; her grandchildren, Patty Conte, Jane Althoff, Daniel York and Jeffrey York; and nine great-grandchildren and a great-great-granddaughter. She was predeceased by three sisters and a brother.

Friends may visit with her family on Friday, June 21st from 5 pm to 8 pm. at Beecher & Bennett Funeral Home, 2300 Whitney Ave., Hamden, CT. A graveside service will be held on Saturday, June 22nd at 10 am at Evergreen Cemetery, 183 North St, Watertown, CT. A memorial service will also be held on July 6th at 1 pm at the Hamden Plains UMC, 15 Church St., Hamden, CT. In lieu of flowers, contributions in Grace's memory may be made to a charity of one's choice.