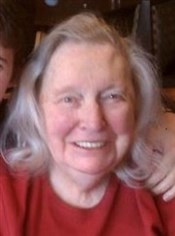 Let us remember with thanksgiving the life and ministry of Jane Elizabeth Brennen Finucane Dubuque, who died on November 30, 2015 at 85 years of age. She was the wife of the Reverend Raymond Dubuque who retired from the New York Conference in 1986. He served in our conference at Waterbury, East Pearl in New Haven, Port Ewen and Esopus, Rhinebeck and Hillside, and Highland Falls and Fort Montgomery.

Jane was born in West Haven, CT on April 10, 1930 to the late Harold and Lillian O’Brien Brennan. She was a devoted promoter of adoption for children with special needs. Jane testified before the Connecticut Assembly in support of legislation to further rights for adopted children and appeared on the CBS program Up to the Minute to promote adoption of hard-to-place children nationwide.

In addition to her husband, Jane is survived by sons and daughters-in-law Kevin and Gail Finucane of Madison, CT and Brian and Judy Finucane of Cortland, NY; son Steven Dubuque of East Haven, CT; daughters Kathleen Dubuque of Nashville, TN, Janine Dubuque of Meriden, CT and Cindy Dubuque of Hartford, CT; daughters and sons-in-law Patricia and Dan Frantz of Nashville, TN and Christine and William Marinos of Hamden, CT; brother and sister-in-law, Robert and Patricia Brennan of Easton, CT; and sister and brother-in-law, Ellen and Edward Williams of East Marion, NY. She is also survived by 13 grandchildren and 12 great-grandchildren. She was predeceased by two daughters, Jane Colleen “Kate” Linker and Bethany Foss, and two brothers, Dalton H. Brennan and Harold “Butch” Brennan.

A memorial service was held at East Haven Memorial Funeral Home on Friday, December 4, 2015.  Donations may be made in Jane’s memory to the Children’s Defense Fund: 25 E. Street, N.W. Washington, DC 20001.