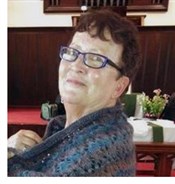 Let us remember with thanksgiving the life and ministry of Terrence L. “Terry” Smith, 74, of Cornwall, PA, who died on Thursday, August 22, 2019 at Hershey Medical Center after a short struggle with pancreatic cancer.

Terry was born in River Falls, WI on October 20, 1944. She was the daughter of Donald D. and Betty Jane (Moss) Chapin. She graduated from River Falls High School and attended the University of Wisconsin.

Terry was the widow of Rev. Gene M. Smith. Gene served the following churches in the Catskill Hudson District: Kenoza Lake, Fosterdale, and Jeffersonville; Milton and Marlboro; and Monticello. Gene was elected conference secretary in 2004, and was serving at Monticello UMC and as conference secretary at the time of his death in May 2007.

In addition to being a homemaker and clergy spouse, Terry was a master cross-stitcher. She was a member of the Embroiderer’s Guild of America and served several years as the local chapter president. Terry was a member of the United Methodist Women, serving the members of her local district as well as working within the conference. Terry represented the New York Conference well as she traveled to many national assemblies.

After Gene died, Terry moved to Modena and transferred her church membership to New Paltz UMC, where she was on the worship committee. Terry was the friendly face who greeted you on Sunday morning; extravagant hospitality was her middle name. Terry could be found in the church kitchen or dining room, teaching the children how to make blankets for the Children’s Home, or setting up a sewing marathon to make pillowcases for children in the hospital.

Terry is survived by her son, Scott M. Smith of Middletown, NY; her grandchildren, Terriann Smith, Scott Patrick Smith and Connor Martin Smith; and her brother, Daniel D. Chapin of Berea, KY. She was preceded in death by her daughter, Heidi Chapin Smith.

Services will be at the convenience of the family. In lieu of flowers, donations may be made to the Cornwall Manor Benevolent Fund, 1 Boyd Street, Cornwall, PA 17016 or to New Paltz UMC Organ Fund, 1 Grove Street, New Paltz, NY 12561.