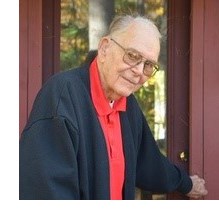 Let us remember with thanksgiving the life and ministry of Rev. Arthur William Bloom, 91, of Groton, VT who peacefully entered the church triumphant surrounded by his family on Thursday, February 7, 2019. Art was born on March 16, 1927 in Bronx, New York, the only child of Knut William Bloom and Esther Christianson Bloom.

Art served in the U.S. Army for two years as a sergeant in the military police. He attended Wilkes College in Wilkes-Barre, PA, receiving a degree in criminology. In 1948 he received his license to preach in the Central Pennsylvania Conference. While serving churches, he continued his education at Drew University, attaining his master of divinity degree and several years later completing his doctor of ministry degree. He became a full member of the New York Conference in 1957.

Art met his future wife, Margaret Reed (Peg), when he was an assistant minister for Peg’s father, Rev. William B. Reed. Art and Peg served five United Methodist churches - Central PA Conference: York; New York Conference: Bedford Hills, Ossining, Northport and Patchogue. During his time in Ossining, he served as chaplain at Sing Sing Prison, where he counseled individuals facing the end of life; he was very proud of this work.

Throughout his career, Art was passionate about his role in developing and mentoring new pastors entering the ministry. After his retirement in 1992, Art continued his ministry, with Peg by his side, preaching, performing baptisms, weddings and funerals, and counseling those in need.

Art and Peg enjoyed over twenty years of retirement. They split their time between their camp on Groton Pond in Vermont, which they called home, and their winter home at Rio Valley Grande Estates in Texas. While in Vermont, Art enjoyed boating, fishing, swimming, and spending time with his daughter and her family. While in Texas, he enjoyed time with his son and participating with friends in many community events.

Art’s last several years were spent at the Westview Meadows and Mayo Nursing communities in Vermont, where he was welcomed with open hearts. The family will always hold the professionals at those facilities - who became like family - very dear to their hearts.

Art was predeceased by his life partner of 60 years, Margaret Reed Bloom (Peg). Art is survived by his son, Bryan William Bloom; his daughter and favorite son-in-law, Joyce Margaret and John Michael LaRosa; their three sons, Anthony William LaRosa and his wife, Cassie Abreau, and their children, Camryn, Kaiulani and Giovanni; Joshua Alexander LaRosa; and Luke Taylor Reed LaRosa and his wife, Lynne McConnell LaRosa. He is also survived by his dearest friend, Miriam Ward Derivan, and her children, Ted and Peg; and all of the Reginald and Elaine LaRosa family, including Peter and Elizabeth LaRosa Nicholson and Steven and Barb LaRosa and their families.